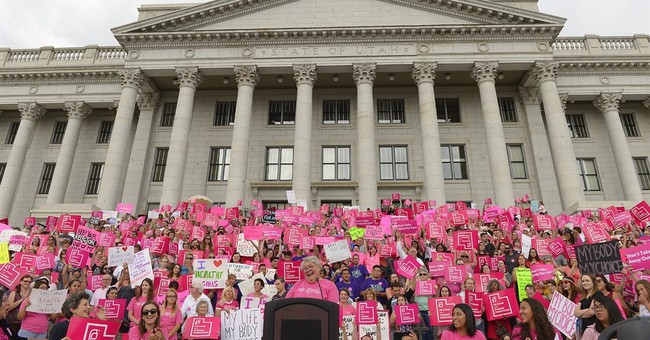 Oklahoma passed Senate Bill 1552 with a 33-12 vote back in May. When it was passed, it was already known that if Bill 1552 became law it would violate federal law. From

"No person shall perform or induce an abortion upon a pregnant woman," the bill's language reads, striking through the clause "unless that person is a physician licensed to practice medicine in the State of Oklahoma."

Supreme Court cases, particularly Roe v. Wade and Casey, established a woman had a fundamental right to abortion. However, the Court has also established, especially in the Carhart cases, that a state does have the right to limit abortion. The state’s interests strengthen in proportion to the pregnancy’s development. This state right also can be exercised in limiting various abortion procedures in order to protect the human dignity of the unborn child, if it also benefits the health of mother.

According to governing.com, the bill would have also strengthened protections for minors. The Oklahoma State Bureau of Investigation would need to “create new protocols for statutory rape investigations” and abortion providers would have to “preserve fetal tissue when an abortion is performed on someone under 14 years old” to be used in the investigation. It would also be a felony to give a minor an abortion without parental consent.

Evidentially, the Oklahoma Supreme Court didn’t find that strengthening rape laws and investigations or ensuring that a licensed doctor performs the procedure is in the interest of women’s health.

Instead, they declared that it created an “undue burden,” which is a vaguely defined concept established in Casey that essentially creates a loophole in most abortion restriction laws.