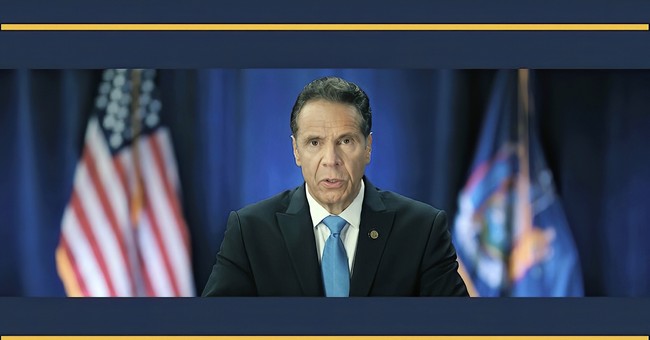 Outrage ensued because, of course, it did. Cuomo's declaration, limiting all religious services to 10 people or less, even as buses, subways, airplanes, trains, and even NYC restaurants now allow more than 10 people to gather very clearly singled out religious groups.

But, Cuomo said, it's these religious groups that are causing outbreaks of COVID-19 and they need to stop or he will close them. NYC Mayor de Blasio attempted a similar threat this spring when he literally threatened to close churches "permanently" if they didn't comply with his order.

What Cuomo and de Blasio don't seem to understand is that the Constitution explicitly forbids executive officers of the government from infringing upon people's right to worship. And even under "states of emergency" that do not seem to have an expiration date, the First Amendment to the Constitution still matters to a whole lot of people.

Perhaps knowing that this criticism was headed his way, Cuomo and his team came prepared to the Monday press conference with photos of the alleged grievously offensive large gatherings of New York Jews.

He then specifically pointed to the images as proof for his stunning declaration against members of religious groups in New York.

"These are pictures from the past couple of weeks," he said. "And these are just emblematic. You've all seen pictures like this for weeks. What did you think was going to happen?"

He made it pretty clear after gesturing to the photos, however, that he hadn't done the homework himself.

"You don't see masks and you see clear violations of social distancing,” Cuomo said, then looking toward his assistant and asking, "when were these pictures from?"

The assistant said to the governor that the photo on the right was "more recent" than the other on the left.

Cuomo went on his diatribe saying that both photos were taken in recent weeks and proved his point that Jewish people in New York needed to be curtailed for their instance on gathering to worship and mourn.

In fact, the photo on the right was far more recent than Cuomo and his aide implied. It was snapped in 2006 at the funeral for Rabbi Moses Teitelbaum in Kiryas Joel, New York, as reported by the Washington Examiner.

Even if that photo had been taken the day before Cuomo gave his tyrannical order against religious groups in New York, it wouldn't have been sufficient evidence to curtail people's rights. But the fact that he had to essentially lie to his constituents with false evidence to back up his ruling proves that he knew his order would be received very badly.