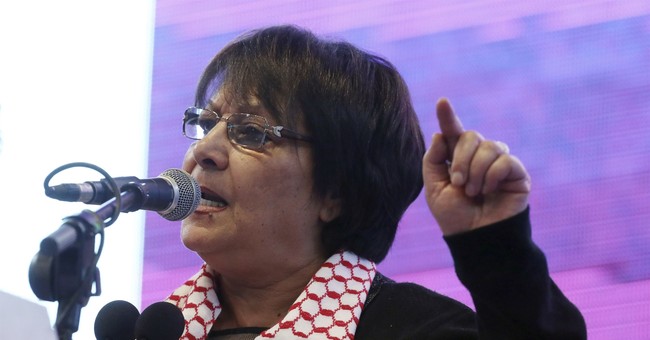 Leading video conferencing service Zoom has seen a year of success and growth as it has made its services indispensable during the time of social distancing during the Wuhan coronavirus pandemic. But while Zoom maintains its position as a non-political conduit that brings voices together in a virtual world, there are a few conversations it simply refuses to take part in.

San Francisco State University managed to find one of those conversations when they began advertising an upcoming discussion with convicted terrorist Leila Khaled, a leading member of the Popular Front for the Liberation of Palestine, which has been designated by the United States and many other countries as a terrorist organization. The discussion, "Support Whose Narratives? Gender, Justice, & Resistance: A conversation with Leila Khaled," was scheduled to take place on Wednesday via Zoom.

Activist group End Jew Hatred organized a protest at the Zoom headquarters in San Francisco earlier this week to bring attention to the fact that Zoom could be in violation of federal laws by hosting the conversation, advertised by SFSU as an educational roundtable discussion.

"Leila Khaled is a racist Jew hater, extremist and terrorist," a Facebook event page for 'End Jew Hatred on Zoom' said. "She is a leader of the PFLP, a designated terrorist organization. Khaled is banned from entering the USA because of her murderous extremism and promotion of ideals that lead to mass extermination. Yet she is being invited to teach students at SFSU on Zoom, and is targeting Jewish students on campus. SFSU is using Zoom to illegally spread Jew hatred in the form of Leila Khaled. This must stop."

Khaled was involved in two plane hijackings in 1969 and 1970. Khaled and another terrorist member of the PFLP hijacked TWA Flight 840 from Rome to Tel Aviv in 1969, forcing the plane to land in Damascus instead of Israel. Khaled was arrested, but six Israeli passengers remained prisoners of Syrian authorities. Two of those passengers were held for two months before Syria exchanged them for soldiers being held prisoner in Israel. Khaled was released without charges.

The following year, Khaled took part in the attempted hijacking of El Al Flight 219 from Amsterdam to New York City. Khaled was subdued and her attempt to take over the aircraft was thwarted. Her co-hijacker was killed. Forced to land at London's Heathrow airport, Khaled was handed over to British authorities. She was exchanged for British hostages taken in another hijacking less than a month later.

A moderator for the scheduled discussion at SFSU painted an entirely different portrait of the 76-year-old criminal, however, painting her extreme beliefs and radical, terrorist behavior as social activism.

"Leila will engage in a conversation with public intellectuals, scholars and other long time internationalist leaders from Palestine, South Africa, the US Black liberation struggle, and anti-Zionist Jewish sisters and brothers," said Dr. Rabab Abdulhadi. "This historic conversation will engage in critical narratives of resistance, resilience, and gender and sexual justice that is timely and urgent in today’s world of white supremacy, racism, discrimination, and xenophobia."

Perhaps it was the realization that they could be breaking the law, but Zoom respectfully disagreed with Dr. Abdulhadi's take on the situation.

"Zoom is committed to supporting the open exchange of ideas and conversations, subject to certain limitations contained in our Terms of Service, including those related to user compliance with applicable U.S. export control, sanctions, and anti-terrorism laws," the company said in a statement on Tuesday to the Lawfare Project, who has been assisting End Jew Hatred. "In light of the speaker’s reported affiliation or membership in a U.S. designated foreign terrorist organization, and SFSU’s inability to confirm otherwise, we determined the meeting is in violation of Zoom’s Terms of Service and told SFSU they may not use Zoom for this particular event."

The Lawfare Project, who had issued warnings to both Zoom and SFSU about their potential violation of federal law for taking part in the event, praised Zoom for their last-minute decision.

"We applaud Zoom for enforcing its own terms of service and complying with U.S. law, which clearly prohibits the provision of technological services to members of designated Foreign Terrorist Organizations."