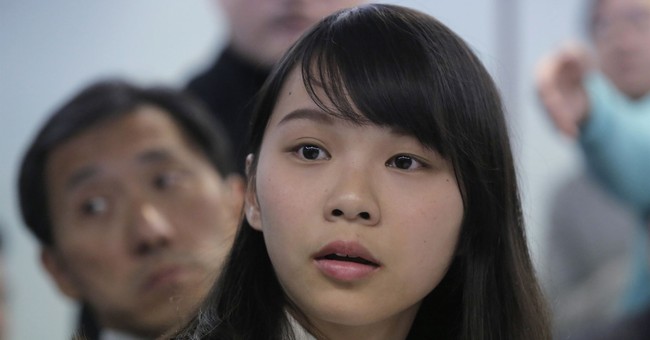 Pro-Democracy activist Agnes Chow was arrested in Hong Kong on Monday after the Chinese Communist Party passed a sweeping National Security Law that criminalized her activity.

Chow was arrested along with several other prominent pro-democracy figures, including media mogul Jimmy Lai, who had founded the last remaining pro-democracy newspaper in China. Secretary of State Mike Pompeo condemned the arrest of Lai, saying that the Chinese Communist Party had "eroded the rights of its people."

I’m deeply troubled by reports of the arrest of @JimmyLaiApple under Hong Kong’s draconian National Security Law. Further proof that the CCP has eviscerated Hong Kong’s freedoms and eroded the rights of its people.

Chow had predicted her own arrest in a series of tweets leading up to the enactment of the National Security Law. She predicted that she could spend her life in prison for her actions and her beliefs.

"It’s now confirmed that Agnes Chow has been arrested for ‘inciting secession’ under the national security law," an administrator for Chow's Facebook account posted on Monday. Video attached to the post showed police escorting Chow into a vehicle and away from her residence.

China effectively ended almost a year of pro-democracy protests in Hong Kong by passing the National Security Law which made it a crime punishable by life imprisonment to advocate for Democracy or independence. Students in Hong Kong had been particularly active in the protests, crying out against the communist control of Beijing which had been closing in since China reclaimed Hong Kong from Great Britain in 1997.

Chow has been a vocal activist and bastion of courage for every Hong Konger vying for independence and freedom of expression since she was a teenager. Chow's friend and fellow activist Nathan Law confirmed her arrest via Twitter on Monday.

"The dictatorship, the Chinese Communist Party (CCP), arrested a 23-year-old woman on suspicion of 'state division' in violation of the National Security Law. She is innocent but may be sentenced to life imprisonment," Law said.

The arrest of Chow and Lai followed the announcement of sanctions against 11 Americans, including several lawmakers such as Sens. Ted Cruz (R-TX), Marco Rubio (R-FL), and Josh Hawley (R-MO). The arrest marks the first enforcement of the National Security Law against the media, an elevation that seems to mark the end of press freedoms in Hong Kong under the law.

By Monday evening, there was still no word whether Chow or Lai would be eligible for bail or where they were being held.

On the day that the CCP passed the National Security Law, Chow suspended her activity on Twitter, a move she said she had no choice in.

"Even in despair, we must always think of each other and live stronger," Chow said in a tweet on June 30. "If you are alive, there is hope."