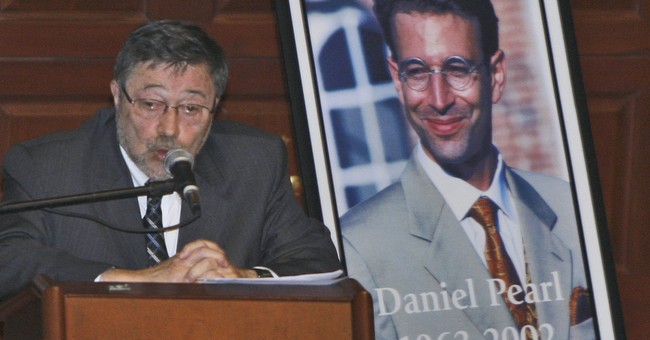 A Pakistani court has overturned the conviction of a jihadist extremist who had been awaiting the death penalty for masterminding the kidnapping and murder of Wall Street Journal reporter Daniel Pearl in 2002.

British born Omar Saeed Sheikh was arrested in connection to the videotaped beheading of Pearl less than two weeks after the murder. He was found guilty by the court in Karachi of planning the kidnapping and murder as well as perpetuating an act of terrorism. All three convictions carried the death penalty. He has been imprisoned in Pakistan for more than 18 years.

Pearl and his wife Mariane traveled to Karachi following the al-Qaeda terrorist attacks on September 11th, 2001 so Daniel could follow and report on the United States War on Terror. He was kidnapped in late January of 2002 after being lured into a trap under the guise of meeting with alleged terror affiliate Sheikh Mubarak Ali Gilani.

The militant group National Movement for the Restoration of Pakistani Sovereignty claimed responsibility for the kidnapping accused Pearl of being a spy. They further demanded that the United States release all detained Pakistani terror suspects and send a canceled order of fighter jets to Pakistan.

Despite efforts from both the United States and Pakistani intelligence forces to locate Pearl based on photos and letters sent from the kidnappers, he was found decapitated and dismembered nine days later in a shallow grave.

A videotape of his murder was later leaked in which Pearl described his Jewish heritage and faith before being killed. The tape ended with a demand from the killers, whose faces were concealed, to release all Muslim prisoners of Guantanamo Bay. Omar Saeed Sheikh surrendered to a former Pakistani intelligence officer and in March, he and three other suspects were charged with terrorism, kidnapping, and murder. The arrest of the final suspect in the murder of Daniel Pearl was made less than a year ago.

Sheikh was sentenced to death in 2002 but questions about the extent of his involvement began after 9/11 mastermind Khalid Sheikh Mohammad confessed to being the man who wielded the knife and killed Pearl in the chilling video of his death. KSM's confession from Guantanamo Bay drew criticism from some because of the torture techniques used by the United States to obtain it.

Forensic experts have, however, cited physical similarities to KSM and the killer in the video however, noting specifically a "bulging vein" in the forehead of the man who held the knife matching one on the face of KSM. The confession became a central focus of attorneys for Sheikh who said that while their client was involved in Pearl's murder, KSM was the killer and more guilty party.

On Thursday, the Karachi court claimed in a 40-page ruling that there were significant discrepancies in evidence that led to Sheik's 2002 conviction.

"There are many missing links in the chain of evidence from the abduction of Pearl to his ultimate murder," the court said after hearing the appeal last month.

Sheik's convictions on murder and terrorism were overturned. His third conviction for kidnapping for ransom was reduced to just kidnapping with his total sentence reduced from three death penalties to just seven years. Convictions that yielded life sentences for three others involved in the murder of Pearl were also overturned.

State prosecutor Faiz Shah told the Wall Street Journal that the Thursday decision from Karachi would be appealed to the Supreme Court. Pakistani authorities further asked the Supreme Court for a 'stay order' that would keep Sheik imprisoned until that appeal is heard.

This New Peer-Reviewed Article Could Be a Game-Changer
Townhall
'Parents' rights' a centerpiece of a GOP that is increasingly hostile to public education and democracy
Twitchy
Trump Makes It Clear He's Running, Lights up Georgia Rally on Biden, Durham and the Audit
Redstate
It Gets Worse: Look Who Worked Together to Frame Donald Trump With Fake Russia Hoax
PJ Media