Rubio: You Know, It's Quite Telling Cuba's Dissidents Weren't Invited to Our Embassy Ceremony 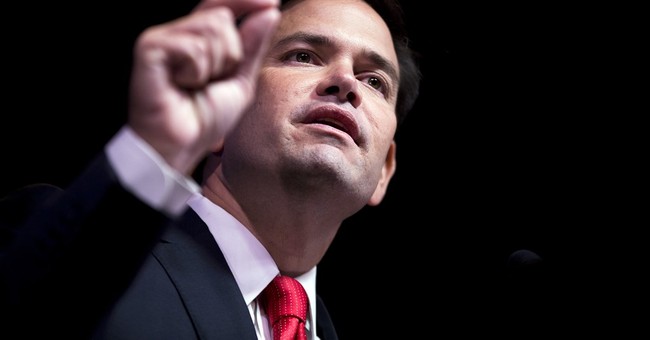 The grand re-opening of the US Embassy in Havana, Cuba on Friday is being met with effusive and predictable praise everywhere you turn. Many Americans, after all, view it as an historic breakthrough in diplomatic relations between a longstanding, Cold War-era regime and the US government.

But one Republican presidential candidate is alarmed — and indeed grossly appalled by — the resumption of friendly relations between the two countries. Today at the Policy Initiative in New York City, Sen. Marco Rubio (R-FL) delivered perhaps the most pointed and fiery speech of his presidential campaign. In it, he blasted the Obama administration for essentially legitimizing the Castro regime with the stroke of a pen, which for 50 years and counting, has sought to undermine and threaten US interests.

“In Cuba, we face proudly anti-American leaders who continue to work with nations like Russia and China to spy on our people and government; who harbor fugitives from American justice; and who stand in opposition to nearly every value our nation holds dear by violating the basic human rights of their own people, preventing democratic elections, and depriving their nation’s economy of freedom and opportunity,” he said, according to a transcript of his prepared remarks.

“The world has missed having an American President who speaks honestly about the world in which we live,” he continued. “In the eyes of Barack Obama and Hillary Clinton, the Cuban people are suffering because not enough American tourists visit the country, when the truth is the Cuban people are suffering because they live in a tyrannical dictatorship.”

Today’s historic ceremony, he went on to say, has effectively handed an entrenched anti-American regime, hostile to democracy and pluralism, universal acceptance among civilized nations. What's more, he noted that many of the Cuban dissents who cherish American values — freedom of speech, regular elections, and the rule of law — will conspicuously and tellingly not be in attendance.

“President Obama has rewarded the Castro regime for its repressive tactics and persistent, patient opposition to American interests,” he intoned. “He has unilaterally given up on a half-century worth of policy toward the Castro regime that was agreed upon by presidents of both parties. He has ensured the regime will receive international legitimacy and a substantial economic boost to benefit its repression of the Cuban people, which has only increased since the new policy was announced.”

“And as a symbol of just how backward this policy shift has turned out to be, no Cuban dissidents have been invited to today’s official flag-raising ceremony at the US Embassy in Havana,” he added. “Cuba’s dissidents have fought for decades for the very Democratic principles President Obama claims to be advancing through these concessions. Their exclusion from this event has ensured it will be little more than a propaganda rally for the Castro regime.”

Not surprsingly, his speech also focused on another perennial issue: The growing threat of a nuclear powered Iran. Again, he blasted the accord as a total and avoidable capitulation. Thus taken together, he explained exactly what these two policy changes have wrought.

“The concessions to Iran and Cuba both endanger our nation,” he stated. “The deal with Cuba threatens America’s moral standing in our hemisphere and around the world, brings legitimacy to a state sponsor of terror, and further empowers an ally of China and Russia that sits just 90 miles from our shore. And if the effort to stop the Iran deal in the Senate fails, the threat posed will be truly historic: a nuclear arms race will likely overtake the Middle East, and the national security stakes of the election before us will become higher than those of any election since the Cold War.”

In the latter half of his speech, however, Rubio gave specific, common sense solutions to each of these respective problems. Broadly put, he said he would unleash economic pressure on both regimes, rescind Iran and Cuba's newfound statuses as legitimate powers, and support democracy in both countries insofar as that was possible.

You can read more about his speech here.