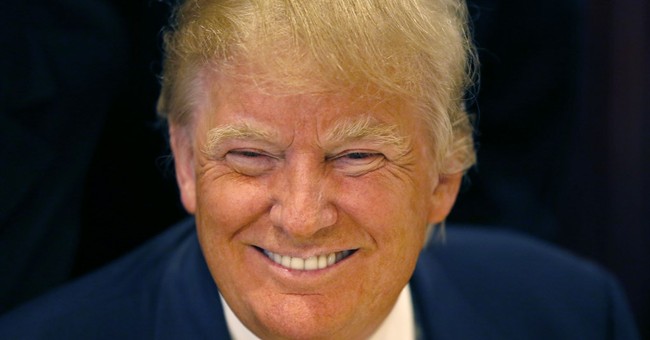 On the heels of Monmouth University’s recent polling offering, which showed Donald Trump in second place with 13 percent of the total vote, a new USA Today/Suffolk University survey released on Tuesday indicates that we have a new Republican frontrunner.

To quote a famous 90s hit classic, say it ain’t so:

Donald Trump has surged to the top of a crowded Republican presidential field, a USA TODAY/Suffolk University Poll finds, but the brash billionaire is also the weakest competitor among the top seven GOP candidates against Democrat Hillary Clinton.

In the nationwide survey, Trump leads at 17% and former Florida governor Jeb Bush is second at 14%, the only competitors who reach double digits. Trump's edge, which is within the poll's margin of error, is one more sign that his harsh rhetoric about immigration and toward his rivals has struck a chord with some voters.

It's true. So those afraid Donald Trump is on par to win the GOP nomination and the general election can rest a little easier as that’s exceedingly unlikely to happen. In this poll, after all, he trails Hillary Clinton by 17 percentage points (51/34) head-to-head, which is by far the worst showing out of any of the “serious” Republican presidential candidates. Jeb Bush and Marco Rubio do the best, however. Bush and Rubio only trail her by four percentage points and six percentage points, respectively. Rubio also has the added distinction of being Republican primary-goers’ favorite second choice pick, earning 17 percent of the total vote on that question.

And yet, however, one wonders how long Donald Trump will enjoy his newfound frontrunner status. To put it bluntly, his favorability ratings are in the toilet. While 23 percent of respondents “approve” of The Donald, a whopping 61 percent...do not. And unlike other candidates, many of whom are relatively unknown to the public, only two percent of respondents have “never heard” of the business mogul. This means that most Americans have already made up their minds about him, and don't like what they see.

How, then, do we explain his rise and popularity? Perhaps Commentary Magazine’s Peter Wehner hit the nail on the head when he wrote:

Any other Republican with this record [of flip-flopping] would find his candidacy crippled. Yet for Trump, it hardly seems to matter. He operates in an Accountability Free Zone, where past stands, past statements, and past financial contributions are forgotten or forgiven.

The reasons for this, I think, is that Trump’s supporters don’t care about his past, his governing philosophy, or his governing agenda; all they care about his style. They believe he’s fearless, a fighter, politically incorrect, anti-establishment, hated by liberals, a man giving voice their frustration and rage at the political class. They believe the nation is collapsing, government doesn’t work, America is being beaten at every turn – and no one expresses that better than Trump. This deep disenchantment is what Trump is tapping into and what explains his appeal.

I’d further add that his supporters love the fact that he is self-funded, and therefore not dependent on, or beholden to, rich donors. This gives him leverage to say whatever the hell he wants, without repercussions. Indeed this is something he even bragged about in his announcement speech to build support for his campaign. Not surprisingly, I believe it really struck a chord with voters.

Again, though, how long can he survive as the frontrunner when most voters do not approve of him — and probably just want him to go away? My suspicion is not very long, but we’ll see.

Bill Maher Notices Something Odd About These Transgender Kids
Townhall
Guy Benson compares MSNBC, CNN graphics on Ga. early voting to what they were pushing last year
Twitchy
Durham Drops Another Bombshell, Reveals FBI Lied About Hillary Clinton-Supplied Disinformation
Redstate
The ‘Mary Poppins of Disinformation’ Inadvertently Spills the Truth About What the Board Was Going to Do
PJ Media