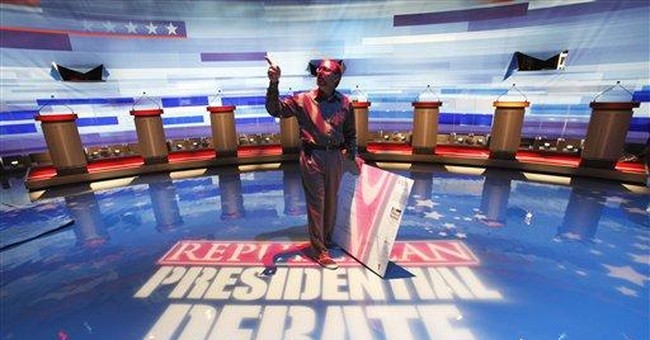 In response to Fox News’ decision to only invite top tier (i.e. “the top ten”) presidential contenders to its August 6 presidential debate in Cleveland, the publisher of the New Hampshire Union-Leader — in a rather roundabout way, one might say — seemingly induced the network to make a key rule-change overnight.

Fox News has changed its plan for the first Republican presidential debate to give second-tier candidates some airtime after a New Hampshire newspaper announced its own competing forum for B-list contenders. According to plans announced late Wednesday, Fox now will host a 90-minute televised forum in Cleveland on the afternoon of August 6 for Republican candidates who fail to qualify for that evening's 90-minute debate.

The announcement capped a chaotic three-hour stretch that began when the New Hampshire Union-Leader published a story announcing it would host a forum on August 6. Publisher Joe McQuaid was quoted in the story saying that the qualification criteria established by Fox for the first debate—that candidates must rank in the top 10 in an average of recent national polls—"isn't just bad for New Hampshire; it's bad for the presidential selection process by limiting the field to only the best-known few with the biggest bankrolls.”

The string of events that impelled Fox News to adopt CNN’s format for the debates is sort of fascinating, and you can read more about it here.* Interestingly, the rule change only came after several back-and-forths between the Republican National Committee (RNC) and the Union-Leader — recounted extensively in the article above. In the end, however, Fox News stepped in and agreed to hold an extra, “second-tier” nationally televised sparring match during the day on August 6 — although the forum in New Hampshire, the Journal notes, has not yet been cancelled.

The Journal also reports that if candidates participate in the Union-Leader’s forum, a non-RNC sponsored event, they could potentially lose debating privileges for the rest of the campaign for defying the committee's rules. But because of Fox's late-night gesture, it seems likely that the issue has been resolved — and therefore all the candidates will now get airtime on the network and be satisfied. We’ll see.

UPDATE: Fox News has released an official statement about the "second-tier" debate:

Moderated by America’s Newsroom co-anchors, Bill Hemmer and Martha MacCallum, the forum will be presented live from the Quicken Loans Arena in Cleveland, OH from 1-3PM/ET on FNC, as well as on the network’s other platforms, including FOX News Radio, FOX News Mobile and FOXNews.com.

The candidates, who do not qualify for the primetime GOP primary debate, will be among those invited to participate in the 90-minute forum, which is part of the additional planned candidate coverage previously announced by the network. Following the forum, the network and Facebook will present the primetime debate from 9-11PM/ET.

The network also announced the following eligibility requirements for the candidates:

· Must meet all U.S. Constitutional requirements; and

*It seems, based on the statement I just received from Fox News, this rule-change was "in the works" for some time.
Is This Why Jim Acosta Went to CPAC?
Matt Vespa
Here's What Ted Cruz Is Doing to Keep Democrats from Packing the Supreme Court
Bronson Stocking