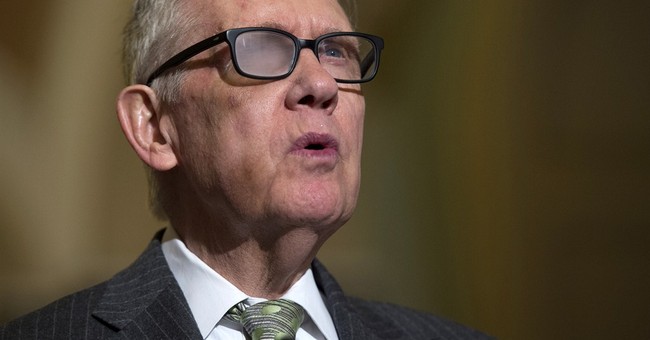 This is an astonishing interview. Truly. The relevant bit is at the 1:10 mark:

"I've really happy to respond to this because it has been blown way out of proportion, but blown my way. Mitt Romney, during the time he was running for president, refused to give us his tax returns...of course he paid taxes, what he didn't do is let us see his tax returns."

This is utter baloney. Mitt Romney did release his tax returns during the 2012 campaign, which showed he was both (a) an upstanding citizen and (b) incredibly charitable and kind with his own money. In fact, he released over two decades worth of tax returns. As Guy summarized at the time: “The Romneys owed and paid state and federal income taxes every single year stretching back to at least 1990.” And yet, Reid baldly claimed this week that the former Republican presidential nominee “refused to show the American people his tax returns.” Huh?

This is a lie. How the interviewer, Jorge Ramos, didn’t know this and therefore missed an opportunity to call Reid out for his dishonest tactics is beyond me. He should have.

Given Sen. Reid’s persona and personality, however, I never expected him to apologize for smearing the one-time GOP presidential nominee. But his justification for why he peddled these statements, for which he offered zero evidence and expressed zero remorse, is not even remotely true. Amazing.