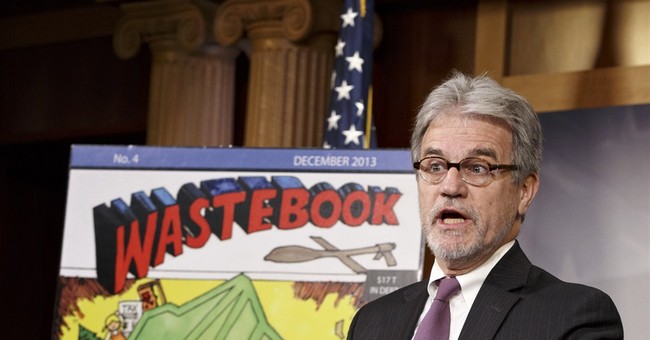 It’s 2014 and that means since last year billions more taxpayer dollars have been flushed down the toilet on projects and studies that have zero redeeming value. Every year, Sen. Coburn (R-OK) and his staffers release a report showing the truly astonishing ways bureaucrats and politicians in Washington spend your money. This year was no different, of course. Some highlights:

Promoting U.S. culture around the globe with nose flutists – $90 million

"Synchronized swimming for sea monkeys" and "watching grass grow." This is just a taste of how wasteful Washington is with public money; read the full report here.

“With no one watching over the vast bureaucracy, the problem is not just what Washington isn’t doing, but what it is doing.” Sen. Coburn emphasized in a statement. “Only someone with too much of someone else’s money and not enough accountability for how it was being spent could come up [with] some of these projects.”
Caught Red-Handed: NBC News Busted for Editing Out a Crucial Detail in the 911 Call of the Ohio Shooting
Matt Vespa
LeBron James Explains Why He Deleted Controversial Tweet About Ohio Officer Who Stopped Knife Attack
Leah Barkoukis
'Nope! Done': Tucker Shuts Down Interview with Ed Gavin
Leah Barkoukis
‘Did the Lockdowns Write This’? Op-Ed Says We Should Stop Feeling Bad for Restaurants Torched by COVID
Matt Vespa
Rand Paul Takes Another Shot At Fauci, Suggests Biden Should 'Burn' His Mask To Promote Vaccines
Scott Morefield