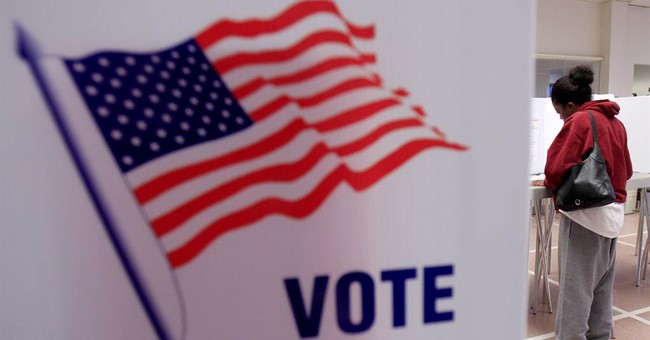 Is it really true that young progressives are leaving the Democratic Party and joining the ranks of the GOP? In a sense, yes, according to a newly published survey conducted by the Harvard University Institute of Politics, but that rightward shift isn’t as significant as one might hope.

It found that [the] youngest sector of the group, those 18-24, are becoming less Democratic and more Republican. In 2010, 38 percent called themselves Democrats. That has dropped to 35 percent. And those identifying as Republicans has edged up from 23 percent to 25 percent.

These statistics aren’t meaningless, of course, but are they earth-shattering? No. Far more interesting, I think, is the fact that the nation’s youngest voting bloc is politically disengaged, and unlikely to turn out in droves in 2014. From the actual survey:

Less than one-in-four (23%) young Americans under the age of 30 say that they will “definitely be voting” in the fall, a sharp decrease of 11 percentage points since November 2013 IOP polling (34%) and eight percentage points lower than seen during a similar time period prior to the 2010 midterm elections (31%: Feb. 2010). In addition, traditional Republican constituencies seem to be showing more enthusiasm than Democratic ones for participating in the upcoming midterm elections and are statistically more likely to say they will “definitely be voting.” For example, 44 percent of those who voted for Mitt Romney in 2012 say they will “definitely be voting,” a statistically significant difference compared to the 35 percent of 2012 Barack Obama voters who say the same. Additionally, self-identified conservatives (32%) are 10 points more likely to vote than liberals (22%); men (28%) are 9 points more likely to vote than women (19%); and young Whites (27%) are more likely to vote than African Americans (19%) and Hispanics (19%).

So while young Americans overall are less inclined to cast ballots in 2014 for obvious reasons, Republican-leaning constituencies are very much fired up. That's significant. We’ve written extensively about how important the millennial vote can and will be in future election cycles. Thus, if millennials stay home in November, this could spell electoral doom for many incumbent Democrats, many of whom traditionally court young voters to help them win re-election.

It’s also worth pointing out that while the president’s job approval rating has risen markedly since the survey was last conducted, it is largely African-Americans and Hispanics who are keeping his numbers afloat. For example, white millennials have all but abandoned him, or so it seems:

President Obama’s job approval rating has improved six-percentage points since fall 2013 IOP polling, going from a previous low-water mark of 41 percent five months ago to 47 percent today. Since November, the president has seen steady gains across most of the major 18- to 29- year-old subgroups analyzed, although in most every case his job approval rating remained below 50 percent – including on his handling of health care (39%: April 2014; 34%: Nov. 2013). President Obama’s approval rating is buoyed by the steady support of the African American community (83% approve) and the solid support of a volatile (i.e., nine-point swing in one year, 21-point swing in five years) Hispanic community (60%); among Whites between 18- and 29- years-old, the president’s approval rating is 33 percent. Compared to the first IOP poll conducted during the 2010 midterm election cycle, the president’s approval rating during this midterm cycle is down nine percentage points overall, down 12 points among young Whites and nine points among young Hispanics and Latinos – however, among African American voters there has been no change in approval over the same period.

Even if President Obama’s core young constituencies give him positive marks overall, what good will they do for the party if they stay home in November? Not a whole lot, obviously.

Unfortunately for Democrats, however, that's a real possibility.
The Antifa Member Who Organized the Mob Outside the White House Has Been Arrested
Katie Pavlich
Texas Lt Gov Says He No Longer Listens to Dr. Fauci
Cortney O'Brien
WATCH: Florida Sheriff Issues Strong Warning to Violent Rioters To Not Mess With His County
Julio Rosas
BU Proposes Retiring Their Mascot's Name Over 'Gone With the Wind' Connection
Alex Corey