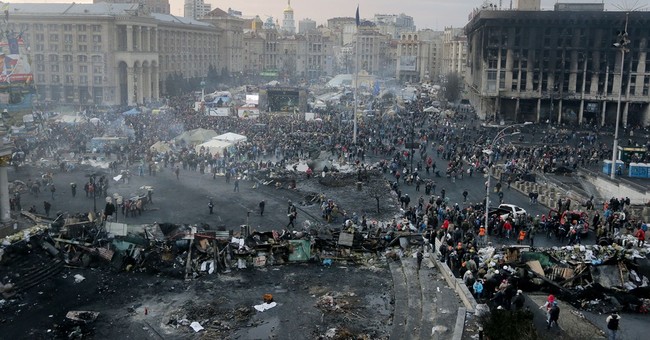 After the bloodiest day in Ukraine’s history since the Soviet Union collapsed, President Viktor Yanukovych has made at least three major concessions to the Maidan protest movement, according to the Associated Press: (1) the presidential elections initially scheduled for March will be moved up to December; (2) members of the opposition will have a voice in the new coalition government; and (3) the powers of the president will be significantly curtailed:

Ukraine's president gave in to pressure from European diplomats and offered concessions Friday to defuse a crisis that has divided his country and left scores dead. Shots rang out near Kiev's protest camp and protesters fought among themselves about what to do next.

The capital remained tense after President Viktor Yanukovych announced early presidential elections and promised to bring opposition members into the government — but didn't say when. …

Nonetheless, many Euromaidan protestors want President Yanukovych gone. No matter. The AP reports today that leaders of the opposition have embraced the accord:

MORE: Ukraine opposition leaders have agreed to the deal and are heading to president's office, spokeswoman says: http://t.co/wOoTzisfKb

And indeed, they have signed it already:

Two opposition spokeswomen said the deal was signed in the Ukrainian president's office Friday, but had no details.

President Yanukovych, for his part, released this statement:

In these tragic days, when Ukraine suffered such heavy losses, when people died on both sides of the conflict, I consider it my duty to the bright memory of the deceased to declare that there is nothing more important than human life. There are no steps that we must not do together to restore peace in Ukraine.

I declare steps that must be done to restore peace and avoid more victims of the confrontation.

I declare that I initiate early presidential elections.

I initiate the return of the Constitution of the year 2004 with redistribution of powers aside parliamentary republic.

I call to begin the procedure of establishing the government of national trust.

The opposition, however, seems to have forced his hand to make concessions, given how unpopular he is:

After 48 hours in which the fate of Ukraine was fought out in the square, Yanukovich was rapidly losing support.

The deputy chief of the armed forces resigned and opposition deputies in parliament voted to overturn severe anti-terrorist laws enacted by Yanukovich's government this month and ordered security forces back to barracks.

Meanwhile, the situation on the ground is far from stable. While at least 77 people lost their lives on Thursday -- and those numbers will presumably rise in the coming days -- there were reports today of more gun shots fired and clashes breaking out in Independence Square.

But the worst of the fighting is over, it seems. For now at least.