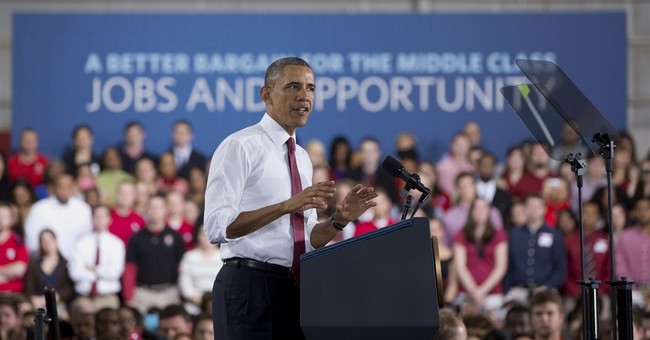 We’ve been writing a lot about Sen. Kay Hagan (D-NC) lately. But admittedly, I never thought it would come to this. To recap, the North Carolina Democrat announced earlier in the week that she wouldn’t be able to attend the president’s speech in her home state. Coincidentally, we learned the following day from a left-leaning polling firm that her approval ratings are not very good, and Obamacare is exceedingly unpopular with her constituents -- a law she helped pass. Thus, it doesn’t take a rocket scientist to figure out why she was “unable” to attend.

But there was a complication. The president decided it would be a good idea to invoke her name anyway, praising her for all the “great work she’s doing” -- even though she made it abundantly clear this week she doesn’t want anything to do with him (via TWS):

In fairness, the kinds of people who still have the strength and stamina to attend Obama’s economic speeches these days are probably already in the tank for the Democrats anyway. The president was speaking to his base here, I assume, and therefore bringing up all the “great work” Hagan’s done was perfunctory and expected. Then again, I also have a sneaking suspicion that after being slighted by her, the president took matters into his own hands, and publicly praised her on purpose knowing full well she wouldn't appreciate it. “Don’t want to appear in public with me, huh? I’ll show you,” kind of a thing. That’s certainly possible, right?

But then again, that would be a very stupid thing to do. With all these House Democrats seemingly retiring -- and his chances of recapturing the House looking increasingly unlikely -- losing the Senate would basically turn him into a lame duck president overnight. He needs her to win to prevent that from happening.

It seems foolish and petty, then, to punish her for doing something every other Democrat in America is already doing: avoiding the president responsible for Obamacare at all costs.