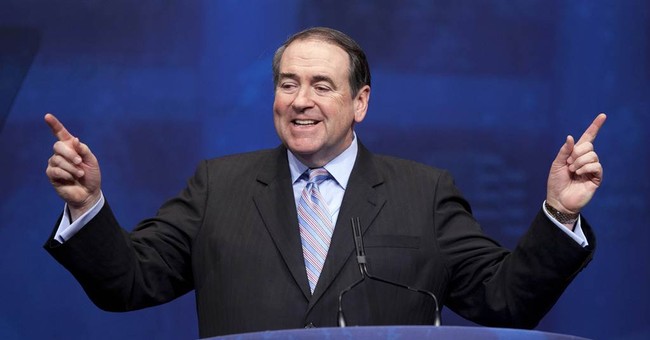 Mike Huckabee ran for president in ’08 and came up short. Now pastors and social cons alike are urging him to get back on that horse:

Former Arkansas Gov. Mike Huckabee, a 2008 GOP presidential candidate turned media personality, is looking at another bid for the presidency, this time backed by ministers eager to put an evangelical into the White House.

Huckabee will test the waters when he returns home to Little Rock, Ark., December 12-13 to address the Arkansas Renewal Project, part of evangelical organizer David Lane's American Renewal Project. Huckabee had the support of pastors in his 2008 fight against eventual winner Sen. John McCain.

Among the potential candidates looking at a GOP bid, Huckabee is closest to the pastors. He is a social conservative who can quote the Bible as easy as former President Bill Clinton.

According to reports, pastors from Iowa and South Carolina — two key political states early in the GOP primary season — are meeting with Huckabee during the convention to urge him to run.

Will he? My suspicion is if he feels he has a fleeting chance of clinching the nomination, he’ll sign the papers. Until then, he’ll continue testing his personal brand and waiting to see if “Huckabee 2016!” has any resonance.

Earlier this year the former governor made headlines by predicting that if Republicans cave on gay marriage, the party is done. Finished. Evangelicals, he argued, “will take a walk.” That’s to say, they won’t support Democrats per se, but they sure as hell won’t back a party that sold them up the creek. And, according to him, Republicans need them to win nationally. Three years before an election, then, one wonders where presumed presidential candidates like Scott Walker, Bobby Jindal, Marco Rubio and Rand Paul will ultimately wind up on this issue. There’s certainly room for some nuance. Huckabee, by contrast, is a reliable traditional conservative who will not “pivot” or “evolve.” His feet are firmly planted. Hence why pastors in early-voting states are urging him to run.

Huckabee, too, can also speak about Judeo-Christian values and conservatism as a force for good in the world as fluently (and convincingly) as any potential presidential candidate out there. But are GOP primary voters really willing to back an also-ran? The party seems to be moving in an entirely new direction: Rand Paul, Marco Rubio, Bobby Jindal, Scott Walker, and yes, Chris Christie, are now the faces of the Republican Party. Voters want younger, more dynamic conservative candidates -- don’t they? -- who can also appeal to young people, moderates, centrists, and conservative Democrats. Unfortunately, I’m not sure Huckabee fits that mold anymore, if he ever did.

It might be best for him to just sit this one out.