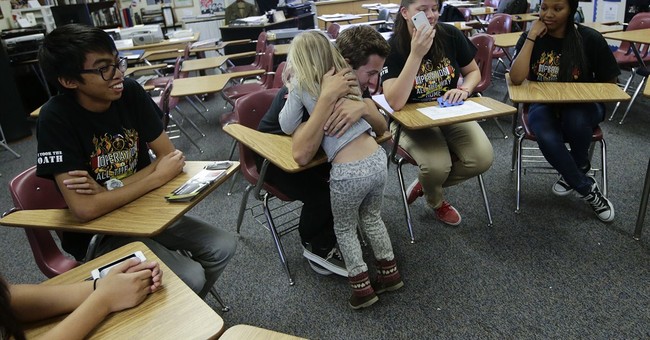 In the olden days, a big problem in public schools was that students didn’t have adequate access to books and textbooks. Now, it seems, something else entirely is holding them back: far too many classrooms in the United States don’t have access to…the Internet?

A crime is happening in our schools every day. And it’s not the type of crime that hall monitors or security cameras can solve. At issue: Only 39 percent of public schools have wireless network access for the whole school. But perhaps the greater offense—up to this point, at least—has been apathy.

At work and at home, most of us live our very wired, connected lives—moving between wi-fi zones as we give little thought to the millions of schoolchildren around the country who go to school every day without Internet or broadband connections, without access to 1:1 computing, and without the benefit of modern handheld learning devices.

Angry mobs of parents should be storming schools with pitchforks over this critical issue of broadband access, US Department of Education official Richard Culatta told this year’s SXSWedu festival. For their part, parents are not, but perhaps there is good reason to believe that the Storming of the Schoolhouse can be thwarted. For now.

President Barack Obama’s ConnectED initiative, announced this summer, aims within five years to connect 99 percent of America’s students through next-generation broadband (at speeds no less than 100 Mbps and with a target of 1 Gbps) and high-speed wireless networks in schools. Now we’re talking.

I’d say upwards of 95 percent of what I read I absorb on either a laptop, desktop, IPhone or Kindle. I assume most Americans are the same way. Like it or not, the world is changing, and public schools, it seems fair to say, must change with it. Not only does the Internet provide a limitless database of information for students to explore, but it allows teachers and educators to continue designing innovative and dynamic lesson plans that will keep their students engaged. According to the authors, the issue here isn’t just that students don’t have enough access to broadband wireless Internet connections; many students don’t have access to devices on which to use the Internet. And unsurprisingly, teachers in poorer public schools know this all-too-well:

In U.S. schools, there is a similar disparity among social classes. According to a recent Pew study, teachers of the lowest income students are more than twice as likely as teachers of the highest income students (56 percent vs. 21 percent) to say that students’ lack of access to digital technologies is a “major challenge” to incorporating more digital tools into their teaching.

How do we improve public schools? There is no singular answer. The United States spends tons of money on our education system – more so than any other developed country on earth, in fact. So what do we do?

Investing in the technology of the future, the authors agree, is absolutely essential in preparing students for life after they graduate. But this isn't always easy. Nonetheless, there must be a way for even poorer and less well-off schools to better prioritize and utilize the resources they are given.

The future depends on it.