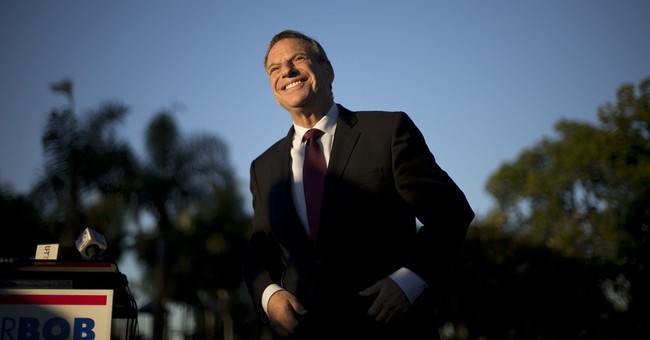 The court says a hearing will be held at 10 a.m. in the presiding department in the downtown central court, for Filner to face the charges.

U-T Watchdog reported earlier this month that a criminal grand jury had been empaneled to hear evidence of possible criminal charges against Filner, 71, who resigned from office on Aug. 30. At least two lawyers said that they had clients who were called to testify in front of the panel, later this week.

The charges ahead of grand jury proceedings may indicate a plea deal has been reached.

In case you’d forgotten, American taxpayers are still expected to shell out tons of dough for Filner’s cushy pension, which will now presumably be used to pay for his ever-rising legal fees. Or will it?

But in a defiant farewell speech, Filner said he was the victim of a lynch mob and believed he would be vindicated if due process was allowed to run its course.

In exchange for his resignation, the city will pay Filner’s legal fees in a joint defense of the lawsuit, and cover any settlement costs assessed against the mayor except for punitive damages. The city — as required by state law — will also defend Filner against legal actions stemming from other alleged sexual harassment said to have occurred during his nine months in office as mayor.

City Attorney Jan Goldsmith said, however, the city will not represent Filner in any criminal case.

That’s a sweet deal if you’re Bob Filner. He’ll finally get his day in court for free and the city will basically pay at least some “settlement costs” if and when he’s convicted. Perfect! Sure is nice working for the government, huh?

You’d think if a city official (in this case, the mayor of San Diego) was accused by 17 women of sexual impropriety the city would at least stick the accused with the legal costs, right? Heck no. As they say, power has its privileges and there’s absolutely nothing we the people can do about it.

Californians are paying for this courtroom carnival one way or the other -- and so are you.

UPDATE: Filner pleaded guilty to all three criminal charges in Superior Court today. His sentencing date is scheduled for December 9, 2013.