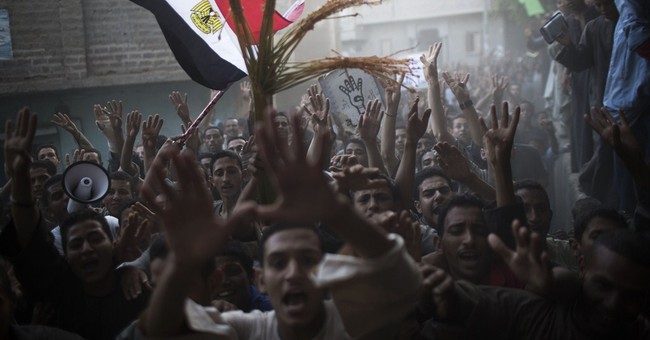 On Monday, a Cairo court ruled that the Muslim Brotherhood -- a decades-old Islamist movement that was formally permitted to form a political party in Egypt in 2011 after former President Hosni Mubarak was ousted from office -- has been banned, and all its assets confiscated. Reuters reports:

An Egyptian court on Monday banned the Muslim Brotherhood from carrying out any activities in the country and ordered the seizure of the group's funds, widening a campaign to debilitate the Islamist movement of deposed President Mohamed Mursi.

The court ordered the government to seize the Brotherhood's funds and administer its frozen assets.

The army-backed government is waging the toughest crackdown in decades on the Islamist group, which says it has a million members. Security forces killed hundreds of its supporters and rounded up thousands more since Mursi was deposed by the army on July 3 after mass protests against his rule.

The appeal process is perhaps already underway, but the ruling is a major setback for the Brotherhood. Why? Because it will severely undermine the group’s appeal and influence in the region:

The Brotherhood was outlawed for most of its 85 years in existence. But after the 2011 ouster of autocrat Hosni Mubarak, it was allowed to work openly and form a political party. In a string of post-Mubarak elections, the Brotherhood rose to power. In March, it registered as a recognized non-governmental organization.

Morsi, a member of the Freedom and Justice Party who had public support from the Muslim Brotherhood, was forced from office July 3.

The ruling, which can be appealed, opens door for authorities undermine the group's elaborate network of social services, dealing a deadly blow to its pillars of grass-root support.

Reuters further notes that the contentious ruling will drive another wedge between Muslim Brotherhood supporters and Egypt’s interim government. Young Egyptians, some of whom are either sympathetic to the Brotherhood or supportive of the Freedom and Justice Party, will be more likely to go “underground” and take up arms against the state. If anything, this in turn will likely increase the bloodshed and uncertainty in Egypt, a country that has already been devastated by violence since former Muslim Brotherhood President Mohammed Morsi was forcibly removed from office.