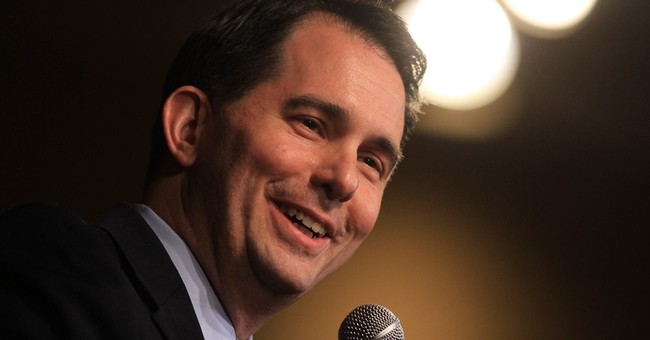 Remember when the Left launched an unsuccessful recall election in June of last year to oust Wisconsin Governor Scott Walker from office? They failed, of course, not least because his hugely successful reforms have brought the Badger State back from the brink of financial collapse. His victory, however, was significant for at least two other reasons: first, he stood up to union bosses -- and won -- by a decisive margin; and two, he proved that limited government conservatism, when properly applied, can produce remarkable results. This is why his forthcoming and highly anticipated memoir (a behind-the-scenes look at his contentious and, at times, difficult three years in office), is expected to be a gripping read. And given the sneak peak of the cover released yesterday, the Journal Sentinel reminds us why:

"Unintimidated: A Governor's Story and a Nation's Challenge" is co-authored by Marc Thiessen, a former speechwriter of President George W. Bush. It will be published Nov. 19 by Sentinel, the conservative imprint of Penguin Group.

According to an earlier release from the publisher, in the book "Governor Walker will share the inside story of how the battle for Wisconsin was won — the reforms he enacted, the mistakes he made, the lessons he learned and how those lessons can help conservatives win the battle for America."

Walker faces re-election in 2014. The book is widely viewed as a way for Walker to get his message out nationally in anticipation of a potential presidential run in 2016.

Walker has refused to say how much of an advance he received for the book. According to Journal Sentinel columnist Dan Bice, Walker said he will disclose the advance in his financial disclosure statement next year.

We already know that Governor Walker hasn’t explicitly ruled out a presidential run in 2016. And so, if he wins re-election in 2014, don't be surprised if he emerges as that dark horse candidate conservatives have long been waiting for.