WaPo: Kerry Gets "Four Pinocchios" For Saying He Opposed the Iraq War 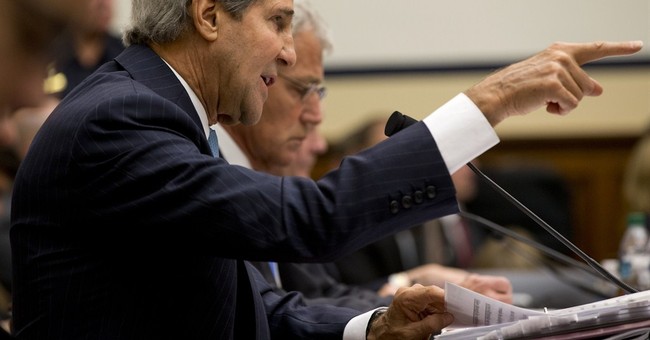 Unlike President Obama, Secretary of State and former longtime Massachusetts Senator John Kerry cannot credibly say he opposed the war in Iraq. But that’s exactly what’s he attempted to do on at least two separate occasions. And as a consequence, the fact checkers at the Washington Post aren’t letting him get away with it. Some background:

This is at least the second time since becoming secretary that Kerry has asserted that he opposed the 2003 invasion of Iraq while serving as a Democratic senator from Massachusetts. The first time the Kerry made this claim, during a student forum in Ethiopia, his statement mysteriously disappeared from the official State Department transcript.

On matters of consequence such as war, Kerry’s positions over the years have been rather “nuanced,” according to the Post. But the verdict is: Four Pinocchios.

Many politicians have a tendency to look back at their past statements with rose-colored glasses. But given that Kerry has now twice in recent months made the claim that he opposed the war in Iraq, this is clearly not a case of a momentary slip-up.

For Kerry, the uncomfortable fact remains that he voted to authorize the use of force against Iraq, he believed the intelligence that Hussein had weapons of mass destruction and he said there was little choice but to launch an invasion to disarm him. Kerry may have been highly critical of Bush’s diplomatic efforts in advance of the invasion, but that is not the same thing as opposing the war when it started.

It’s time for the secretary to stop making this claim. In trying to make a distinction between his vote to authorize the war and his later dismay at how it turned out, Kerry earns Four Pinocchios.

Sure, Kerry has been on both sides of the divide when voting to authorize or not authorize U.S. military brass abroad. But the facts are unmistakable in this case: Kerry, as much as he hates to admit it, supported the Iraq War. Case closed. He might not believe he did, of course, but the facts speak for themselves. On the bright side, Kerry comes across as less of a partisan hack than some of his friends in the media. The very same liberal publications that raised concerns about the Iraq War on “principle” are now shamelessly shilling for the president vis-à-vis Syria. (I wonder why). But Kerry doesn’t necessarily seem to suffer from this problem. He’s on record supporting interventionism as recently as a decade ago. So I guess we should at least give him that.