Good News: Syria to Give Up its Chemical Weapons 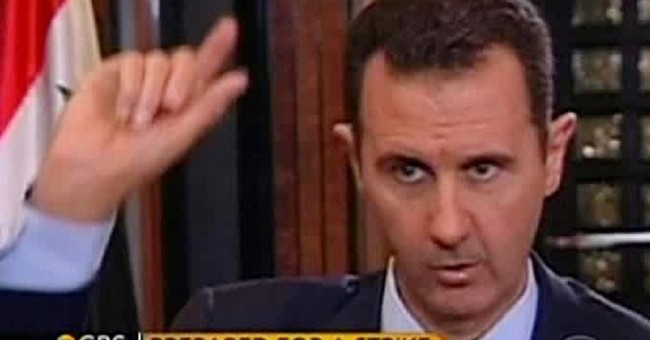 It’s been a very strange 24 hours, my friends, beginning with Secretary of State John Kerry’s off-the-cuff remarks yesterday that have seemingly helped broker a deal with the Assad regime:

Syria said Tuesday it has accepted Russia's proposal to place its chemical weapons under international control for subsequent dismantling.

Al-Moallem added that Syria did so to "uproot U.S. aggression."

His statement sounded more definitive than his remarks Monday, when he said that Damascus welcomed Russia's initiative.

Presumably the last thing a dictator wants fighting a bloody civil war is for a superpower like the United States to step in and ally themselves with the rebels. History teaches us that dictators, above all, care most about self-preservation. That’s why Assad is gleefully agreeing to the Russian proposal. Nevertheless, there are still many concerns. Here’s one:

U.S. officials said Kerry expressed concern that it would be hard to verify whether Syria had complied with any such plan, or to know if the regime had still kept some of its chemical weapons stockpiles.

Senators John McCain (R-Ariz.) and Lindsey Graham (R-SC) issued a joint statement Monday urging Congress to press ahead with support for airstrikes regardless of the Russia initiative, saying that “only the threat of military action against the Assad regime's chemical weapons capabilities is what could create a possibility for Assad to give up control of those weapons.”

The president himself is skeptical whether Syria will fully comply if a diplomatic resolution is reached. Meanwhile, Human Rights Watch announced Tuesday that Assad probably used chemicals weapons on his own people.

Republican hawks, for their part, maintain that Assad will not play ball with the international community unless the threat of military force is on the table. To that end, they want the president to green light the airstrikes. But considering where the public sits on the Syrian question, if the Obama administration can plausibly “resolve” this crisis without involving the U.S. military, why wouldn’t they? After all, given the impending and much-anticipated budget fights coming this fall the president can’t afford to expend all his political capital on Syria. We’ll see how this plays out.