Surprise: McCain Gets Heckled at Townhall Meeting on Syria 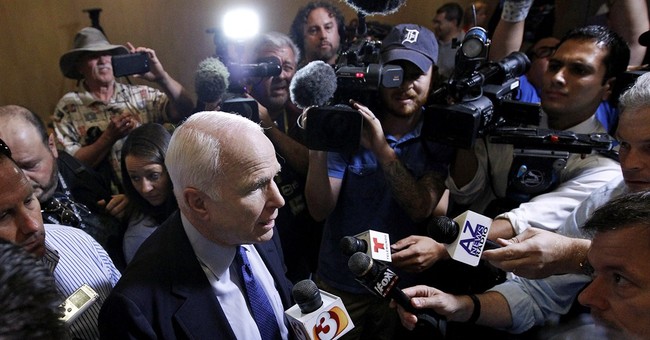 Is there anything more predictable than watching Senator John McCain (R-AZ) -- the most outspoken advocate for military intervention in Syria -- get heckled by his constituents at a town hall meeting in Phoenix? Absolutely not.

First things first: Kudos to Arizona’s senior Senator for having the courage to defend his position on the Syrian question publicly. Too many members of Congress steered clear of their constituents during the August recess. This is cowardly and unacceptable. So, he deserves at least some credit here. But at the same time, the public is hardly evenly divided about to what to do. The people have spoken, it seems. Most Americans, at least according to several new polls, are either (a) undecided or (b) don’t want anything to do with Syria. Thus even support for limited airstrikes against the Assad regime seem lower than expected, and most fear a “backlash” against the U.S. and her allies would be imminent if and when the U.S. did get involved.

Nonetheless, there’s an argument to be made for intervention--– and some of the most persuasive conservative writers and editors have made it. But this is a tough sell. Never mind that the U.S. has invested heavily in the Middle East in both blood and treasure over the last decade -- but last I checked, we’re broke (!) and the threat of “mission creep” is a real concern. That said, McCain obviously understands what’s at stake here but believes decisive military action is worth the cost. (He seems to be one of the few members of Congress who does). Meanwhile, Nancy Pelosi is warning that the president probably doesn’t even have enough “aye” votes in his own caucus to green light a military resolution. Which begs the question: If true, will he act unilaterally (he believes he has the constitutional authority to do so) or will he simply back down -- thus embarrassing the United States even more? The ball will soon be in his court, my friends. What will he do?