“The Tea Party is the Resurrection of the Confederacy” 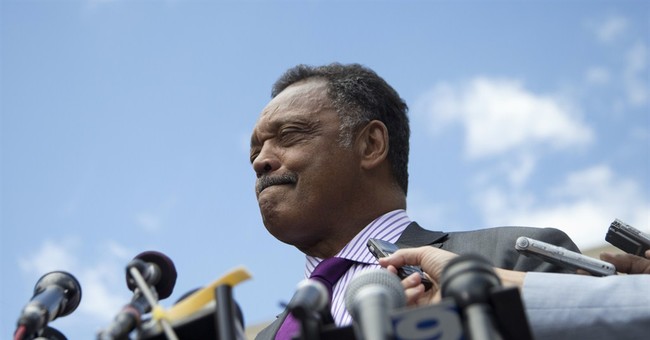 The Reverend Jesse Jackson made these hysterical and offensive comments yesterday (via the Washington Times):

The Rev. Jesse Jackson said in a Tuesday interview with a national news outlet that there’s no question about it — Republicans are constantly pushing the race button on all matters of policy and politics, and tea party activists are akin to redneck racist throwbacks from the Civil War era.

“The tea party is the resurrection of the Confederacy,” he said, in an interview with Politico. “It’s the Fort Sumter tea party.”

He added: The GOP is “absolutely” using race as a reason to oppose President Obama and White House police proposals.

This is just the latest in a series of notable remarks the civil-rights activist has made lately, as captured by the press.

A week ago, he posted a Twitter statement about the murder of Australian Christopher Lane, in Oklahoma on a college baseball scholarship: “This senseless violence is frowned upon.” Readers reacted in outrage, calling his choice of words — “frowned upon” — a tactless understatement. Shortly after, Mr. Jackson took to Twitter again and commented on the same murder — only referred to the victim, Mr. Lane, by an incorrect name — as Christopher Lee.

Jackson is a venerable civil rights activist. He participated in the March on Washington and was with Dr. King when he was assassinated. So he understands, better than most, the country’s long and tortured history of race-based discrimination and oppression. But how on earth are his comments constructive? Is this honestly how he hopes to build a bridge of trust between liberal Democrats and Tea Party Republicans?

Dr. King famously told opponents of civil rights that he and his supporters will “match your capacity to inflict suffering by our capacity to endure suffering.” What did he mean by this? In my view, he meant that civil rights activists would endure every conceivable injustice and humiliation to advance the cause of freedom. They would not resort to name-calling or violence. They would expose the injustice of race-based discrimination through peaceful means: boycotts, sit-ins, and marching. And they were successful, of course. Thus I find it somewhat ironic that as an active participant in the civil rights movement, Jackson would go on to adopt tactics Dr. King would almost certainly find abhorrent.

No one alive today can or should be held responsible for the sin of slavery. Tea Partiers are not Confederates. Is this not self-evident? And if Mr. Jackson took a little time to do some research, perhaps he would soon realize that at the heart of conservatism -- the Tea Party ethos, if you will -- is the idea of opportunity. Republicans don’t oppose President Obama because of his race; they oppose him because they believe his policies are dangerous and will stand in the way of social justice. In the war of ideas race is completely irrelevant. And if he doesn’t see that now, well, I suspect he never will.

UPDATE: Here we go. Apparently, according to one MSNBC pundit, if you support voter ID laws you essentially support Jim Crow. Question: Does this also apply to, say, black conservatives like Allen West -- a man who happens to be an outspoken advocate for voter ID?

Congratulations, Republicans. You have taken the place of Jim Crow. You are now the people conspiring to keep folks from voting."