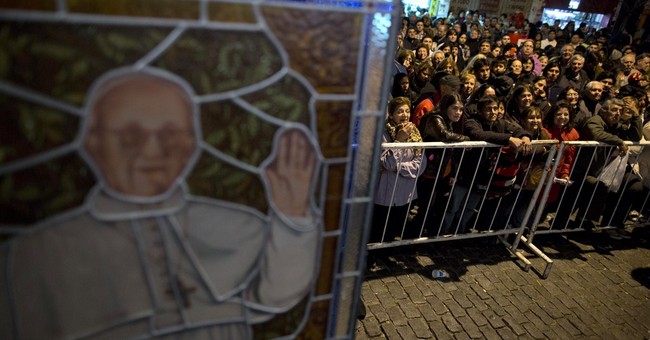 This must have been a long time coming, no? How a Catholic priest could ever support a president, let alone a political party, that increasingly supports abortion-on-demand is beyond me (via CNS News):

(CNSNews.com) – Catholic Bishop Thomas Tobin, head of the diocese of Providence, R.I., said he recently changed his voter registration from Democrat to Republican, noting that the 2012 Democratic National Convention and the Democrats’ strong support for abortion and homosexual “marriage” was the last straw.

“The a-ha moment for me was the 2012 Democratic National Convention – it was just awful,” said Tobin on Tuesday before a meeting of the Rhody Young Republicans in Providence. Tobin is 65 and has been a registered Democrat since 1969.

“I just said I can’t be associated structurally with that group, in terms of abortion and NARAL and Planned Parenthood and [the] same-sex marriage agenda and cultural destruction I saw going on,” said Tobin, as first reported by Ted Nesi at WPRI.com. “I just couldn’t do it anymore.”

It's worth pointing out that not all Catholic leaders are traditional conservatives. Take, for example, Sister Simone Campbell. Remember when she spoke at the 2012 Democratic National Convention? She threw her moral authority behind Barack Obama’s candidacy in part because he cared about “the poor” and “the vulnerable, and in part because he championed health care “reform.” And yet during her brief remarks she failed to mention President Obama’s long and rather sordid history of voting against the Born Alive Infant Protection Act as an Illinois state senator. Question: Since Sister Simone evidently endorsed and publicly backed President Obama in 2012, does that mean (as a Catholic nun) she also supports abortion rights -- and believes that innocent human life is expendable?

Of course this is not to say that every self-professed Catholic is pro-life or supports traditional marriage. Many do not. But the truth is that the Democratic Party has shifted so far to the Left in recent years on the issue of abortion that pro-life Democrats are harder to come by. There’s simply no room for Bishop Tobin (or any Catholic leader or lay person) in the Democratic Party who is fully committed to defending the unborn. The Eunice Kennedys of the world are a dying breed. And Catholic leaders, it seems, are finally starting to realize this.