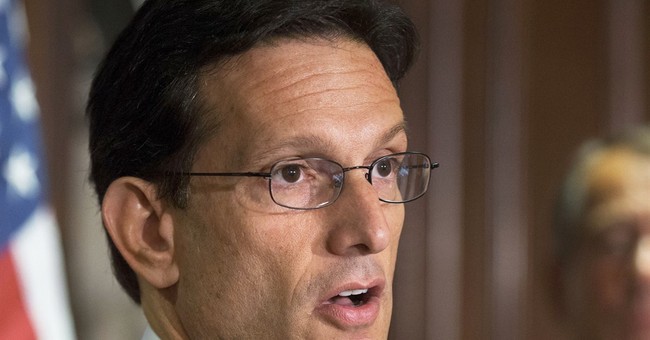 Correct me if I’m wrong -- but is there single political issue the mainstream media care less about than school choice? I mean, they obsess over trials that never should have been prosecuted, let alone politicized, and fawn over women who defend late-term abortion “rights,” but when it comes to a movement that is changing and impacting kids’ lives in unimaginable ways, they’re conspicuously silent.

On Tuesday House Majority Leader Eric Cantor (R-VA) had an opportunity to visit a local D.C. charter school with some other members of Congress. Here’s what he had to say during his visit:

"My take away is really that the future of our country starts at schools like this - it really does. We've listened to parents talk about...the day elation hit their household when they found out, as Chairman Kline said, that they so-called hit the lottery. And it's because that they finally realized that their child was going to have access to the kind of education that here before perhaps may have only been left to those who could afford the choice of moving to a school district where a public school could meet their needs.

"And that's the spirit of this school. That's the spirit of the charter school movement and public school choice - and that is to afford all parents and all children the opportunity for a quality education. And it is really a phenomenal success story that doesn't often get told, and that's why we're here. As Chairman Kline suggested, the Student Success Act - that he and other members of the Committee that are here have been working so diligently on - is a bill that speaks to parents and kids that would like an experience like this. It institutes reform in our education process, and it will expand the ability for the likes of Two Rivers and others to accept more students and see more success.

Affluent and upper-middle class families will always be taken care of. We all know that. And as the Majority Leader points out, they’re the families who can afford to move to more prosperous neighborhoods and therefore send their kids to better schools. Who then, might I ask, gets left behind? Answer: the poor and the disadvantaged, of course.

It’s a strange phenomenon that inner-city families literally jump for joy when they “hit the lottery” – i.e., find out one of their sons or daughters has been randomly selected to attend a public charter school. But shouldn’t good schools be available to every child, not just those fortunate enough to draw a lucky number? And by the way, what exactly happens to those who aren’t as lucky? Are they forever consigned to a life of disappointment and diminished prospects?

If the Republican Party truly cares about academic achievement and opportunity for all, this is an issue they must seize. No child should be forced to attend schools which are failing them -- particularly schools where students seem almost predestined to fail. Earning a high school diploma is not necessarily a prerequisite for success, of course, but it certainly has been proven to help. And charter schools in the D.C. area have been very successful at getting their kids to graduate.

Republican pundits invariably complain that certain demographics are slipping away, and that the party must Do Something (like pass comprehensive immigration reform, for example) to win them over. But only by first confronting problems that impact their communities directly can they ever hope to make any sort of gains with them politically. And supporting school choice programs is perhaps the best place to start.