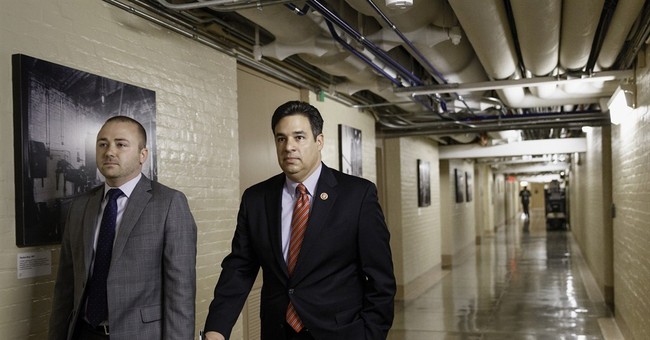 A new bill to secure First Amendment protections for religious Americans is gaining strong momentum among conservatives in the House of Representatives. It has gained as many as 115 supporters, including Republican heavyweights Luke Messer (Ind.), Bill Flores (Texas) and Majority Whip Steve Scalise (La.).

The bill, written by Rep. Raul Labrador (R-Idaho), would protect churches, charities and private schools from being punished by the government for opposing same-sex marriage. This comes just three weeks after the Supreme Court decision that legalized same-sex marriage nationwide, and it reflects widely felt concerns that those who oppose same-sex marriage for conscientious reasons could be legally punished. These fears have a concrete basis: opposition to same-sex marriage has already cost some Americans their jobs — for example, Brendan Eich, or Aaron and Melissa Klein.

This bill, dubbed the First Amendment Defense Act, is reminiscent of the 1993 Religious Freedom Restoration Act (RFRA), which the Congress passed almost unanimously in response to the SCOTUS ruling in Employment Division v. Smith (1990). In that case, the Court had upheld Oregon's right to deny unemployment benefits to two Native Americans who had been fired for using a certain drug (peyote) as part of a religious ceremony. Congress staunchly opposed the ruling, as did a wide array of policy groups including the ACLU, and President Clinton signed the bill into law. In a similar way, the First Amendment Defense Act comes in the wake of a landmark SCOTUS ruling (Obergefell v. Hodges) — except in this case, Congress is not protesting the ruling but rather anticipating legal challenges to religious liberty that will likely result from the ruling.

It is unknown whether the bill can garner bipartisan support. While the 1993 RFRA won massive bipartisan support, this bill is likely to run up against a common sentiment among liberals that religious liberty — especially the free exercise of religion, which the Constitution explicitly protects — could result in discrimination toward LGBT individuals. In actuality, this bill only preserves the status quo with regard to religious liberty: that public actors such as schools, hospitals, charities, and individuals cannot be denied normal privileges — like tax exemptions, or federal grants — simply because it exercises its religion.

Only one Democrat, Illinois Rep. Dan Lapinski, has sponsored the bill thus far. That could be a sign of thin support from the Democratic side of the aisle. Some Democrats have said they need time to examine the content of the bill before committing either way. One openly gay Democratic congressman, Rep. Jared Polis (D-CO), initially hinted at supporting the bill, but then changed his mind after reading it. In his explanation, he seemed to suggest that religious liberty should not extend beyond places of worship into the workplace -- a view that effectively reduces religious liberty to freedom of "worship." He said:

"[T]his bill goes far beyond simply places of worship, extending to businesses and nonprofits, for example. The bill even contains a clause stating that it must be construed as broadly as possible by the courts and could be read to permit all businesses to use their views on marriage as justification to discriminate against LGBT Americans.”

Historically speaking, this view represents a radical departure from the constitutional conception of religious liberty, which protects not only places of worship, but also the "free exercise" of religion in the public arena. This was the conception of religious liberty upheld by RFRA back in 1993, and that bill was actually sponsored by liberal stalwarts Chuck Schumer (D-NY) and Ted Kennedy (D-MA). Yet in recent months, many liberal voices have pushed the radically diminished view of religious freedom reflected in Rep. Polis' statement.

As proponents of the bill push for a vote, one obstacle aside from Democratic opposition could stand in their way: the GOP establishment. Rep. Labrador, the bill's sponsor, is not exactly on the GOP establishment's friend list, as he has been one of their most vocal critics in recent months. GOP leaders have been ruthless in punishing in-party dissenters this year, and some of the bill's supporters worry that Labrador's vocal criticism could cause the GOP leaders to block a vote on the measure. But Labrador met with House leadership in person last week, and he said that they assured him they are not trying to block him. He told one reporter:

“They are not threatening me personally about my bill. They assured me legislation that is important will go to the floor, so I take them at their word. [Majority Whip Kevin] McCarthy assured me he’s not trying to get in the way of the bill.”

Other proponents of the bill are confident that it will receive a fair hearing, given its sheer importance. Rep. Trent Franks (R-Ariz.) said:

“I don’t think they would ever make a judgment on critically important policy based on personalities."

Rep. Tom Cole (R-Okla.) is also cause for optimism, as he is close to House leadership and seems to be strongly supportive of the bill:

“I would hope it gets a vote. Members going home for August town halls would like to have had an opportunity to stake out their position on this. … There’s clearly quite a head of steam.”