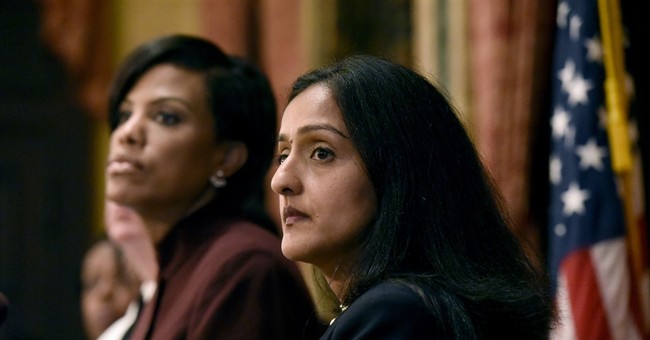 Conservative senators shared their concerns about Associate Attorney General nominee Vanita Gupta at Thursday's Senate Judiciary Committee hearing. Gupta was a vehement critic of President Trump while she served as the president and CEO of the Leadership Conference on Civil and Human Rights. In hearings she's said she "regrets" her "harsh rhetoric." Republicans also note that her past statements suggest she wants to decriminalize drugs and defund the police.

"Americans deserve a Department of Justice that is lead by someone who believes in principles like equal justice, equal protection under the law, and the rule of law."

As Sen. Cotton was getting going, Judiciary Committee Chairman Dick Durbin (D-IL) interrupted him to hold a sudden vote. As more than one observer noted, that move broke the rules.

Senator Durbin broke the Committee's own rules to ram her nomination through.

Not a great show of confidence in Vanita Gupta that they can only advance her by breaking the rules.

"This is an embarrassment and a disgrace," Sen. John Cornyn (R-TX) reacted when Durbin called the sudden vote.

It was a tie 11-11 vote, leaving the committee dead locked on the controversial nomination.