Sen. Cotton on How the Chamber of Commerce Has 'Gone Left' 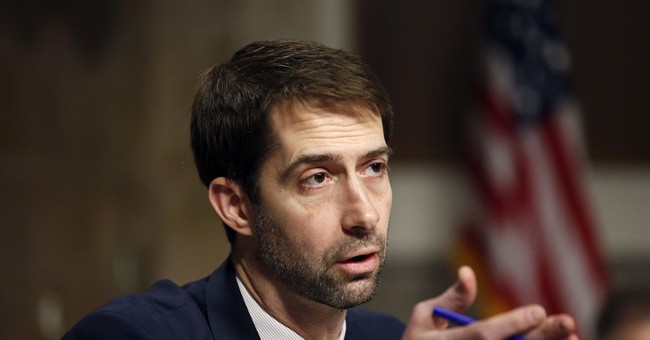 "The Chamber of Commerce supposedly represents American main street businesses," radio host Hugh Hewitt told his guest Sen. Tom Cotton (R-AR) on Tuesday. "It’s gone off the rails. It’s gone left. Have you followed this? Do you have a comment on it?"

The U.S. Chamber of Commerce, Cotton agreed, "has become a self-licking ice cream cone." He expanded on that point.

"As far as I can tell, it mostly just exists to continue to pay the lavish salaries of its executive and give them expense accounts for fancy meals and fund their private jet travel to their luxury condos in South Florida," Cotton continued. "I mean, the Democrats have humiliated the Chamber in recent years."

Neera Tanden, Cotton noted, had a history of "viciously attacking" the Chamber of Commerce as recently as last year. Yet they still endorsed her to be the director of Office of Management and Budget. Following criticism for her past partisan comments, she's since pulled out of the running. The Chamber has also endorsed several liberal Democrats for Congress, all of whom, Cotton said, voted for Nancy Pelosi’s "radical union bill."

Cotton added that the Chamber has purged all Republicans from their ranks and is now "just a front service for woke corporations who are trying to peddle anti-American theories and demanding that their employees get reeducated and indoctrinated on anti-American ideas, like the fact that somehow we’re all terribly racist, or every one of our institutions is racist, and we all need to go to reeducation camps."

The Chamber responded to Sen. Cotton and defended their mission with the following statement:

“Washington is confused. The U.S. Chamber is proud to work tirelessly to support our members and businesses of every size around the nation and the world. The Chamber is committed to working with pro-free enterprise, pro-business, pro-governing members of Congress in both parties.”