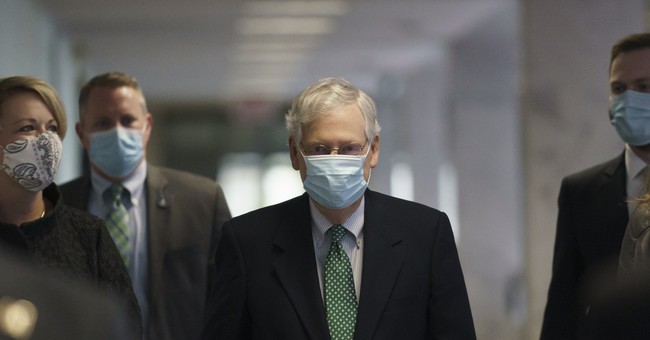 Washington has "fumbled the ball in the red zone," Senate Majority Leader Mitch McConnell (R-KY) regretted on the Senate floor on Wednesday.

The Senate leader explained who the folks are who are hurting because of Congress's inaction, before sounding off on the actual culprits.

“There are medically-vulnerable Americans who’ve watched Operation Warp Speed appear to succeed at a historic pace — but Congress can’t even agree to fully fund the distribution efforts that will get the vaccine to you," he remarked. “There are Americans who’ve been thrown out of work through no fault of their own who are watching federal aid programs tick toward expiration in a few weeks — even though neither side in Congress opposes extending them!"

The Republicans have offered solutions, to no avail.

“But the Speaker of the House and the Senate Democratic Leader have been just as consistent," McConnell continued. "At every turn, they have delayed, deflected, moved the goalposts, and made the huge number of places where Congress agrees into a hostage of the few places we do not. Back in the summertime, I pointed out the obvious. I said leading Democrats simply didn’t want any more help to reach American families before the election."

How right he was. This week Speaker Pelosi and other leading Democrats like Sen. Bernie Sanders admitted that they waited until after the election to make a deal.

“The Speaker of the House of Representatives views it as a success that she denied struggling people relief they badly needed, for months, because she thinks she got the political result she was after," McConnell said.

The most recent deal rejected by the Democrats was a $916 billion White House proposal that would deliver $600 direct payments for individuals and $1,200 for couples. In a joint statement, Pelosi and Senate Minority Leader Chuck Schumer said that the package was "unacceptable" because it cuts the unemployment insurance proposal. House Democrats passed their own $3 trillion COVID relief bill in May.

“Negotiating 101 suggests we set those two controversial pieces aside and plow ahead with the huge pile of things that we agree on," McConnell noted. "But that would require both sides to truly want an outcome. Just hours after Democrats poured cold water on that, Secretary Mnuchin tried another new track, and sent over an offer. In a bizarre and schizophrenic press release, the Speaker and the Leader said the Administration was ‘obstruct[ing]’ negotiations...by negotiating."