Lara Trump Tells Us the No. 1 Reason Why Women Are Voting to Re-elect the President 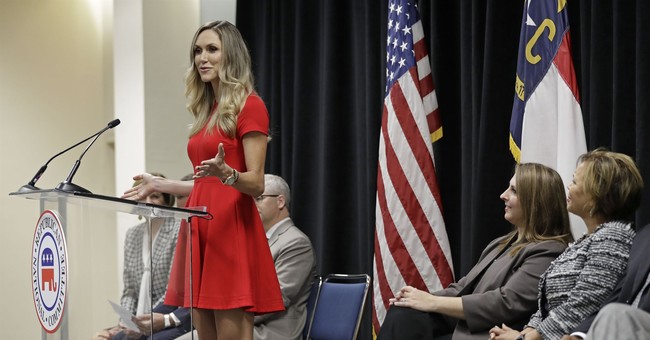 Washington, D.C. - Lara Trump knows those pink Women for Trump buses well. They follow the president around to his rallies, and she's headlined one or two along the way. So by now, she knows why women all over the country are voting to re-elect her father-in-law this year. She listed a few of the reasons for Townhall when we had the chance to talk to her at Thursday night's premiere of the documentary "The Trump I Know" at the Trump International Hotel.

"Right now, what I particularly hear is safety and security," Trump said. "In the past three months, it’s been really frightening to see what’s happening in some of our great American cities. The way that lawlessness has reigned. The chaos, violence, anarchy, looting and arson have really taken over. Sadly, all of these cities are run by Democrats. They are apparently deciding to put politics ahead of the safety and security of their community, of their small businesses, of the people they swore to protect and uphold."

When George Floyd was killed in police custody in Minneapolis this summer, the horrid incident sparked riots across the country. Instead of seeking actual justice for Floyd, rioters burned down small businesses and attacked innocent people. A few people ended up dead. After the riots in Minneapolis came the chaos in Portland, OR, Seattle, WA, Kenosha, WI, and Louisville, KY. All cities, as Lara Trump pointed, run by Democrats. Julio was on the ground for most of the mayhem these past several months, so be sure to check out his coverage. In many cases, instead of accepting President Trump's help to send in federal agents, the mayors let violence run rampant.

Trump said that mothers like her are especially fearful of what will happen if the chaos continues.

"I think whenever you look at those things and you’re a mom in the suburbs like I happen to be, I want to know that my kids are able to play in the front yard without fear that there will be an issue," she said. "I want to know that they go to a safe school and they can ride their bike to school if they want. If you don’t have safety and security, then nothing else really matters."

In addition to safety and security, Trump mused, women want the country to get back to normal. President Trump has promised that there will be no more national lockdowns.

"The Trump I Know," a new film executive produced by Joe Knopp and Daryl Lefever, centers on several of the women in the president's life, be it in his family, campaign, administration, or business. Each of them shares perspectives of Trump you don't hear in the media. You can watch the trailer below.