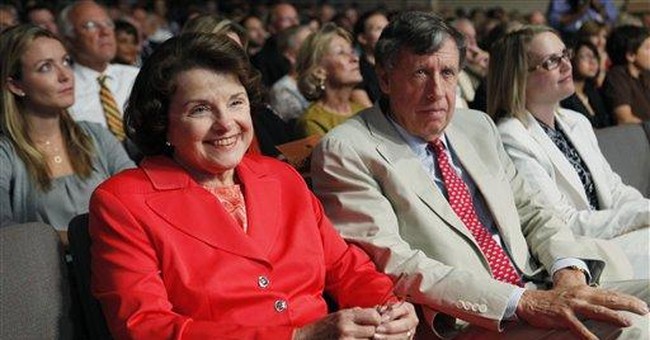 A college admissions scandal has reached Congress. Sen. Dianne Feinstein's (D-CA) husband, University of California Regent Richard Blum, has been named as one of the regents involved in an admissions scandal where officials admitted dozens of wealthy students as favors to well-connected people.

According to the bombshell report from the California State Auditor, Blum was among the regents who wrote "inappropriate" recommendation letters for years.

“They were admitted based on some of their connections to well connected donors, to perhaps an executive that worked at the campus or alumnus,” said Margarita Fernandez, chief of public affairs for the California state auditor’s office.

The audit found a total of 64 inappropriate admissions to the school.

Among those “inappropriately admitted” were a student whose family was friends with a member of the Board of Regents, the child of a major donor and an applicant who babysat for a colleague of a former admissions director, according to the report released Tuesday by the California State Auditor.

In one case, a regent unidentified in the audit sent an “inappropriate letter of support” directly to the UC Berkeley chancellor on behalf of a student with only a 26% chance of winning a spot off the wait list, despite the policy prohibiting efforts by regents to influence admissions decisions by going around the regular process. The applicant was admitted.

Blum denies any wrongdoing and said with a full conscience that he wrote recommendations for well connected kids "a bunch of times" and that “no one ever told me it was wrong.” And yet, according to the San Francisco Chronicle, the Board of Regents has a longstanding policy that bars that kind of influence.

Sen. Feinstein has not yet publicly commented on the scandal.

In 2018, dozens of parents were named in a sweeping college admissions scandal in which they used their own clout to give their children an unfair advantage in the usually stressful process. The two most recognizable parents swept up in the scandal were a pair of actresses, "Full House's" Lori Loughin and "Desperate Housewives'" Felicity Huffman. Huffman offered a tearful apology in court and spent just 11 days in jail. Loughlin, who along with her husband Mossimo Giannulli were found to have shelled out hundreds of thousands of dollars to get their daughters into USC, were not as apologetic or cooperative. They rejected the first plea deal, and it wasn't until recently they pleaded guilty to conspiracy. Loughlin was sentenced to two months in prison. Giannulli got five months.