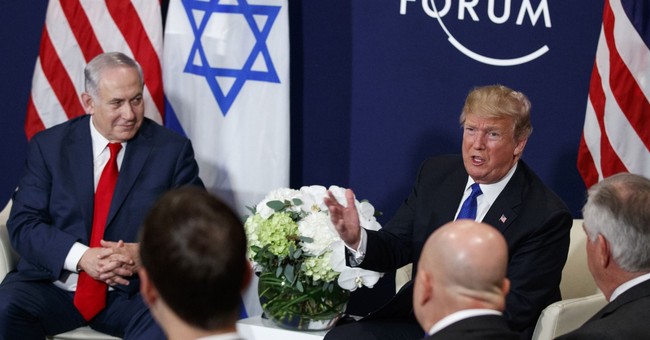 Tuesday, September 15, was a profound day. President Trump oversaw a historic peace deal signing ceremony with Israel, Bahrain and the United Arab Emirates at the White House. The Abraham Accords are expected to help normalize relations between the countries and foment lasting peace in the Middle East.

As explained by the White House, the deal will "chart together a new path to unlock the vast potential of their countries and of the region." It will, the administration explained, recognize "that the Arab and Jewish peoples are descendants of a common ancestor, Abraham, and inspired, in that spirit, to foster in the Middle East a reality in which Muslims, Jews, Christians and peoples of all faiths, denominations, beliefs and nationalities live in, and are committed to, a spirit of coexistence, mutual understanding and mutual respect."

The leaders of each country involved in the deal praised President Trump for his leadership. Trump then made a successful day even better by previewing that five more countries are expected to join the agreement in the coming weeks.

With so much good news to cover, CNN managed to find negative coverage of the achievement. Kaitlin Collins acknowledged the signing, but then went into a diatribe about how the guests were not wearing masks.

"But the signing of the accords that Trump hailed as historic also drew attention because hundreds of guests were packed on the South Lawn with little social distancing and optional masks," Collins said. "Among the hundreds top officials who flouted COVID-19 precautions like AG Bill Barr, Betsy DeVos, Dr. Scott Atlas and GOP Leader Kevin McCarthy, who removed his mask at times and then put it back on."

"We saw you not wearing it earlier," Collins said as she confronted McCarthy.

Amazing. Actual history being made and CNN's top take away: "OMG! People aren't wearing masks *outside*!!!!"

Something tells me Sept. 15, 2020 won't be remembered for who was and wasn't wearing a mask ?? pic.twitter.com/oDlVmJ7Huy

"That Trump hailed as historic..."

Is it not historic, @kaitlancollins?

Are things like, I dunno, peace deals in the Middle East, not, objectively speaking, historic anymore?

You guys really can't see anything clearly. It's TDS 24/7