Young, Paralyzed NC Politician Explains Why He Believes He'd Be 'Dead' if We Had Socialized Medicine 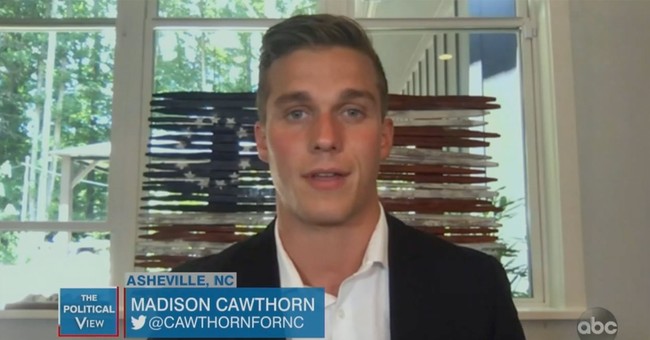 Source: Screenshot via ABC's "The View"

Madison Cawthorn has taken the political world by storm. The 24-year-old conservative pulled off a surprise victory in North Carolina's 11th congressional district primary this week against Trump-endorsed candidate Lynda Bennett, and he's now in high demand on the media circuit.

The young man was even rushed on to ABC News's "The View," not exactly a popular talk show among conservatives. And after the hellos they quickly got down to the hot topics. One issue that is obviously very high on Cawthorn's list is health care. When he was a teenager, Cawthorn was in a terrible car accident that left him paralyzed from the waist down and wheelchair bound. Not to mention $3 million in debt. When asked by The View's co-hosts why he was against free health care for all, he didn't hesitate.

"If I was in a country that practiced socialized medicine, I genuinely believe I would be dead today," Cawthorn said.

Cawthorn was partially paralyzed after a major car accident. pic.twitter.com/NTU7hh1cyb

"Using a single payer, a free based market of health care that gives health care to all, you obviously have to start rationing care," he explained. "I only had about a 1 percent chance to live. It was an absolute miracle I was able to pull through I thank my doctors I thank my God. Without having a great health care system I would not be here today."

He would decrease regulation by encouraging in more health care competition, which in turn would bring medical costs down.

I'm sure we'll be seeing a lot more of Cawthorn in the coming days and weeks.