'This Is Not a Corporate Giveaway': Kevin McCarthy Defends Senate Bill 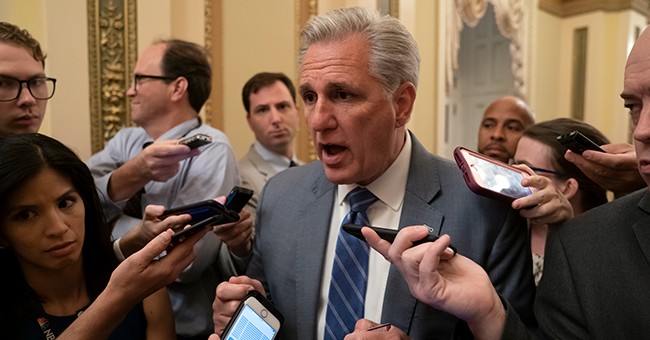 The $2 trillion coronavirus relief bill currently being debated in Congress "provides businesses the resources to stay afloat," GOP Leader Kevin McCarthy insisted on Wednesday. Despite what Democrats have charged, he added, "it's not a corporate giveaway."

McCarthy lauded the admirable way Senate Majority Leader Mitch McConnell drafted the bill, nothing that he did it in a "bottom up, bipartisan" fashion, including Democrats in the discussions. On the other hand, the Democrats' delays these last three days were "politics at its worst." He accused Democrats of "taking advantage" of this dire situation. One of the items they fought for? Millions of dollars for the Kennedy Center.

"People are hurting and losing their jobs," McCarthy said. "This could have been passed."

The GOP leader supplemented his press conference with the following release:

"Every one of our fellow citizens has been touched by this public health emergency, anxious about sickness and unprecedented economic uncertainty.  Our hospitals and healthcare workers are nearing their capacity. They need - and expect - their government to act. This agreement to provide relief to American workers, families, and small businesses is critically important - and should be considered without delay.

"We are already behind.  For the past three days, Democrat leadership in Congress took their eye off the ball, delaying consideration of this bipartisan-crafted bill. They insisted on using this crisis as an opportunity to propose completely unrelated legislation that amounted to an ideological wish list. And they spent more time crafting press releases than policy solutions. The countless hours wasted on partisan posturing served no meaningful purpose - all while resources were delayed for more Americans who became sick or lost their jobs.

"This behavior would lead you to believe this is just another political battle. It’s not.

"Our country is on the edge, but we must be in this fight together.  It's time for Washington to start acting that way, and send this bill to the President."

The Senate plans to vote on the bill Wednesday afternoon, followed by the House. That is, if we don't get anymore Democratic delays.