Dr. Deborah Birx Fleshes Out Some of the Unclear Statistics We've Been Seeing 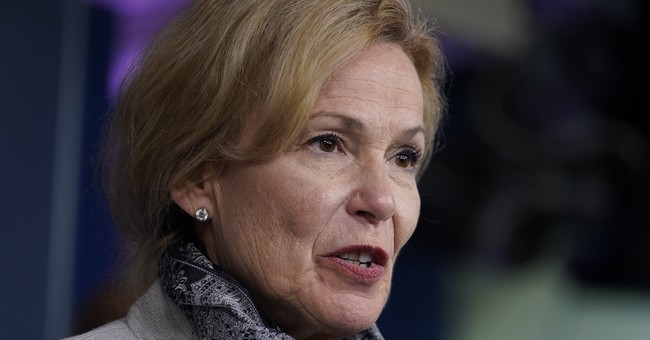 “We project that roughly 56 percent of our population – 25.5 million people -- will be infected with the virus over an eight week period,” he predicted, issuing a stay-at-home order.

Fox News anchor Bret Baier asked coronavirus task force member Dr. Deborah Birx if we can expect those kinds of numbers nationwide on "Special Report" Thursday night. Birx was one of the leaders in the fight against HIV/AIDS in the 1980s, and was appointed as the U.S. global AIDS coordinator in 2014 under President Obama.

"This is the issue when you look at models, and then you look at what happened in China and South Korea," she said. "Certainly they didn’t have that same level of infection, but they did a lot to decrease the spread of the virus."

With more Americans now heeding the administration's social distancing guidelines, Birx says they can dramatically decrease the rate of infection.

"I think that’s why the president put out these guidelines," she added. "We know what to do now to stop the spread of the virus. I think, are we, as an American people, as a community of individuals who care for each other, willing to make this personal sacrifice to change this course of the virus so it’s not 25 million infected, it’s not 5 million infected, but maybe 50,000 to 150,000 infected. That’s the possibility that we hold in our hands."

Baier asked Dr. Birx to address another disturbing number. A new report from The Washington Post showed that younger adults make up nearly 40 percent of coronavirus hospitalizations in the U.S. But the doctor said a closer look at the data tells her that headline is a bit misleading.

Because they had so few cases to consider, the experts lumped 20-year-olds into the 55-54 category.

"So in my mind that’s not all young people," Birx reasoned.

"If you start disaggregating again, if you look at the Italian data, if you look at all of the other data around the world, children and people under 19 have done very well," she continued. "That doesn’t mean they don’t get seriously ill, but they have done well. The data that we have right now for individuals between 20 and 54 is so limited it was grouped together to say 40 percent. But if you look between 20 and 44, it’s 20 percent. So then you have to ask yourself how many people are really between 20 and 30."

There are a few other unclear statistics regarding how long Americans can expect their daily lives to be disrupted, or, more accurately, put on hold. We first heard two weeks, some health officials have predicted eight weeks, and President Trump said at a recent press conference we may not return to normal life until July or August. Dr. Birx didn't confirm any of those timelines, only noting that the White House will "re-evaluate on day 14."

One final, encouraging stat for you. Dr. Birx encouraged viewers to go to the Johns Hopkins dashboard, which has been tracking recoveries.

"And you can see that most of the individuals from China have fully recovered, at about a 96 percent rate," she said. "And if you were outside of Wuhan, about a 99 percent rate."