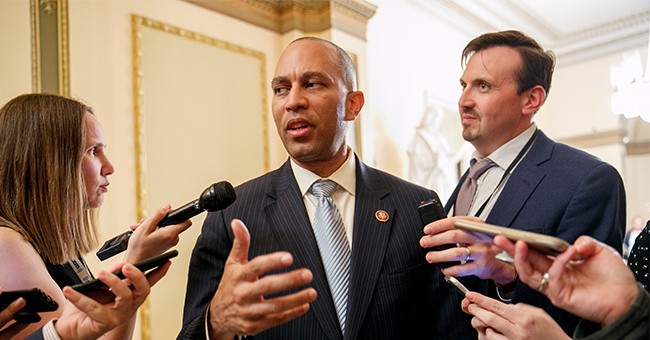 The images of House Speaker Nancy Pelosi smiling and distributing commemorative pens to her colleagues after she signed the articles of impeachment will run through our minds throughout this week's Senate trial. She told us this was a "somber" moment in American history, yet there she was, giddy as ever.

The truth comes out.

This isn't "somber" or "serious" for @HouseDemocrats. This has been partisan since day one. pic.twitter.com/E07UFIXNgr

And now, on the brink of the impeachment trial against President Trump, Pelosi and the Democrats have some explaining to do. "Fox News Sunday" anchor Chris Wallace did his best to get some of those answers out of Democratic Caucus Chair Hakeem Jeffries, one of the seven impeachment managers who Pelosi designated for the trial.

Wallace challenged his guest to react to the pictures of Pelosi handing out pens "like it was a celebratory bill signing." All the participants, Wallace added, "look pretty happy."

"Doesn't that blow a whole in your narrative that the Democrats aren't enjoying the impeachment and the effort to remove this president?" he asked the Democrat.

Jeffries insisted that those pictures and videos don't tell the whole story.

"I was at that ceremony and there was no joy in that ceremony," Jeffries said. "From the very beginning through the end Speaker Pelosi has been clear that we are going to proceed in a serious and solemn and sober fashion. We don’t dislike this president."

In other words, huh.

Despite Wallace's concrete proof, Jeffries repeated that no one in that room was celebrating and that they have no ill will toward the president. The representative noted by way of example how he's personally worked with Trump on the First Step Act and that he and other Democrats were pleased to work with the president on the newly passed trade deal, the USMCA.

That may be so, but those policy successes will be severely overshadowed as the Senate prepares to make its case for Trump's impeachment over that now infamous phone call he had with Ukrainian President Zelensky.

Democrats in the Senate will present their case against the president starting Tuesday at 1 p.m. Trump's defense team, which includes some high profile players, will have the chance to respond by next week.