Another 2020 Contender Ends His Campaign 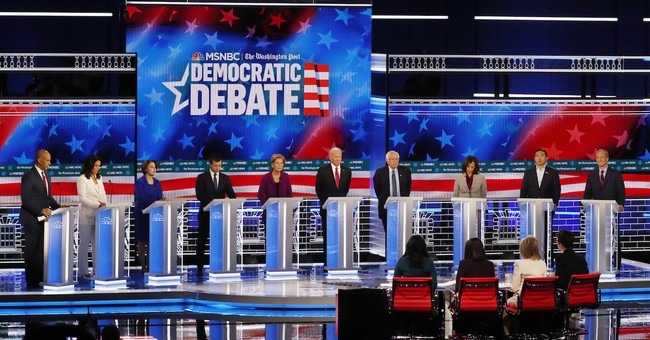 Remember Steve Bullock? He was another guy running for president this year. Now he's not.

On Monday, the Montana governor announced he's suspending his campaign for president because it's become clear he's not going to be able to break into the top tier of candidates.

Thank you for your belief, your trust, and your support. Read my full statement here: https://t.co/eWuRmOqjlT

In his swan song, Bullock reflected on what got him in to the race in the first place.

"I entered this race as a voice to win back the places we lost, bridge divides and rid our system of the corrupting influence of Dark Money," he writes in a post for Medium. "While the concerns that propelled me to enter in the first place have not changed, I leave this race filled with gratitude and optimism, inspired and energized by the good people I’ve had the privilege of meeting over the course of the campaign."

He thanked the "tens of thousands" of supporters who joined on to his campaign. Hey, at least it's more support than Mark Sanford garnered.

Despite advice from many fellow Democrats, Bullock has decided against running for Senate.

"Governor Bullock will continue to faithfully and effectively serve the people of Montana as their Governor," Bullock spokeswoman Galia Slayen told CNN. "While he plans to work hard to elect Democrats in the state and across the country in 2020, it will be in his capacity as a Governor and a senior voice in the Democratic Party -- not as a candidate for US Senate."

Slayen has nothing but fond memories from the campaign.

Before anything else, @GovernorBullock is a good man. He treats his staff with respect, he's a dedicated dad, & is honestly a flat out funny guy. I spent many hours flying around the country w/him. Every trip we shared laughs, poked fun of each other, and always had a good time.

Still, there are plenty more non-top tier candidates where Bullock came from. Over a dozen. The next Democratic presidential debate is on Thursday, Dec. 19.

Stop the Fearmongering: Johns Hopkins Doctor Shreds Latest COVID Madness Peddled by CDC and Fauci
Townhall
How has the Seattle mayor's 'call in a social worker' approach to policing worked out? Just guess...
Twitchy
It’s All About Me: Olympic Edition
Redstate
The Morning Briefing: Who Are the Idiots Who Still Think the CDC Has Any Credibility?
PJ Media