Yep, Trump Was Treated a Lot Differently at the LSU-Alabama Game 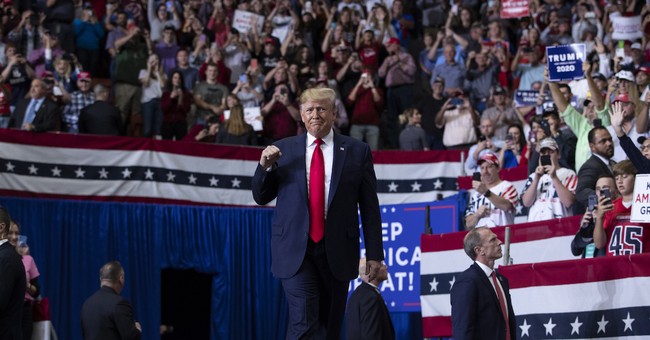 President Trump's cameo on the jumbotron went a little better at Saturday's LSU-Alabama football game than it did at the Washington Nationals World Series game last month. He and first lady Melania were nearly booed out of Nats park and showered with "lock him up!" chants at that baseball game. A few days later he got a more mixed reaction at a UFC fight - a spattering of both boos and cheers. But on Saturday the football fans in attendance at Tuscaloosa Bryant-Denny stadium loudly cheered for the president. And instead of "lock him up!," they were chanting "USA."

Donald Trump Jr. retweeted it, with a message about the media's sudden indifference.

"Why are we not seeing wall to wall coverage of crowd responses anymore?" he asked. "I was under the impression that they were very news worthy last week?"

There was a small group of protesters outside the stadium who were posing with that now infamous Baby Trump balloon, until a Trump supporter came by and slashed it open. He was arrested on a first degree criminal mischief, but released on a $2,500 bond.

"Some liberals tried to come to my hometown and start some trouble," he explained in a Facebook live video. "That ain't happening. I did get arrested. I got charged. That's alright. I'd do it again given the opportunity."

If you missed Saturday's game, you may want to catch the highlights online. It was a thriller, with Alabama impressively overcoming a double digit deficit at one point. In the end though, the LSU Tigers beat the Crimson Tide 46-41.

The president enjoyed the great game, and, I imagine, his warm welcome.

Such an amazing game & place! https://t.co/dGmXYxgKV5