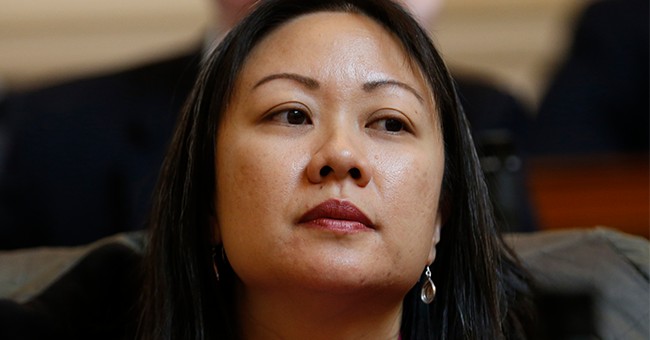 Former President Barack Obama recently shared his list of endorsements for Tuesday's general assembly elections in Virginia. There were a range of candidates from all across the Old Dominion. But some voters were more intrigued by who Obama did not endorse. One notable missing person is Kathy Tran, delegate for Virginia's 42nd district.

Thanks for leaving Lee Carter, Kathy Tran and Danica Roem in the lurch! https://t.co/Gyn446Zu3p

Tran, you may recall, is the legislator who proudly presented a shocking bill in January that would permit abortions up until birth. The Virginia GOP is making sure voters haven't forgotten Tran's legislation, recently posting the viral video of her introducing it and trying to defend it.

"So how late in the third trimester would you be able to do that?" asked Majority Leader Todd Gilbert (R-Shenandoah) after Tran presented her bill.

Gilbert paused as he began to comprehend the magnitude of what she was saying, then pressed on. Even if the woman is "dilating," he cautiously asked, she'd be permitted to have an abortion if she was determined to be in ill health?

Tran said that decision would be left up to the woman and her physician, before eventually admitting that yes, her bill would allow that too.

The delegate's casual presentation of the radical bill did not sit well with her colleagues, nor Virginians, who were so vocal that Tran was forced to make a video for clarification. She said she was "surprised" by the backlash to her bill, because in her mind it would simply "repeal the medically unnecessary and duly burdensome barriers that Virginian women face" when they're considering abortions.

Obama may not have publicly endorsed her, but plenty other Democrats support her and her agenda. Gov. Ralph Northam defended her, while Virginia House Minority Leader Eileen Filler-Corn (D-Fairfax) awarded her the "Defender of Choice" award in May.

Republican candidate Steve Adragna, who's hoping to unseat Tran on Tuesday, said in a campaign video in September that her abortion "extremism" is one reason why he's running.