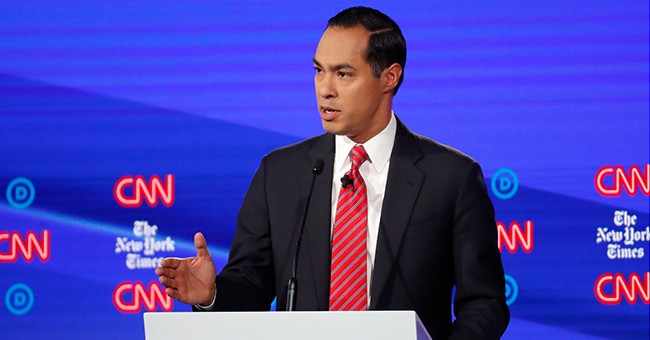 Most every Democrat onstage last night had no problem thinking of a Republican they would call a friend. CNN asked the candidates to try in light of the furor over Ellen DeGeneres enjoying a baseball game with former President George W. Bush. For Beto O'Rourke, his Republican buddy was Rep. Will Hurd (R-TX), who he took a cross country road trip with two years ago. For Sen. Kamala Harris (D-CA) it was Sen. Rand Paul (R-KY), who she worked with on criminal justice reform. And no one was surprised by former Vice President Joe Biden's answer. His years long friendship with Sen. John McCain (R-AZ) was well documented throughout their political career.

Then came former HUD Secretary Julián Castro. He just could not bring himself to admit to being friends with a Republican. Instead, he gave a rambling, vague response. Some social media figures called his answer, "ugly."

“Some of the most interesting friendships that I’ve had have been with people different than me," Castro said. "Either people older than me or people who grew up different from me. Also teachers when I was growing up. People who had a life experience that when I was growing up, was beyond mine. And sometimes also, and this goes to the heart of your question I think, people who thought differently than me.”

Maybe his answer was so jumbled because he didn't have much time to form it? But still, you can't think of one conservative you like?

To make it worse, Castro questioned Ellen's relationship with President Bush. Castro "completely understood" what she was saying about being kind and all, but he also believes they should "hold people to account." Bush being one of those people.

Three hours and no questions tonight about climate, housing, or immigration.

Climate change is an existential threat. America has a housing crisis. Children are still in cages at our border.

Listen to Rep. Tulsi Gabbard's (D-HI) answer instead. Not only did she name a conservative friend, former Rep. Trey Gowdy (R-SC), but she called out Hillary Clinton for dismissing half the country during the 2016 election.

In contrast, Tulsi Gabbard's answer about "aloha" and how she doesn't see Americans as "deplorables" was much closer to the right answer #DemDebate pic.twitter.com/f8WkBvwo7y

In Ellen's moving speech about her friendship with President Bush last week, she explained to haters that it's okay to be civil to everyone.

"Just because I don't agree with someone on everything doesn't mean that I'm not doing to be friends with them," she told her audience. "When I say 'be kind to one another,' I don't only mean the people that think the same way that you do.  I mean be kind to everyone. Doesn't matter."