'How Dare He Speak for Us!': Minnesotans Fume Over Mayor Frey's Treatment of Trump 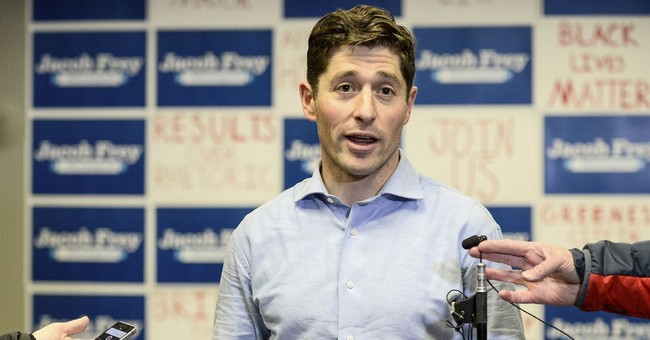 I asked dozens of them why. And the answers were pretty uniform: They are excited for Trump to drain the swamp and to build the border wall.

But, I was also interested to hear what these Minneapolis locals thought about their mayor's very icy welcome for the president. Earlier this week, Mayor Jacob Frey said, "his message of hatred will never be welcome in Minneapolis.” He then announced a new policy barring off duty police officers from showing political support. He also sent the Trump campaign a $530,000 bill to cover the security fees for the rally. The campaign refused, accusing Frey of an "outrageous abuse of power" only intended to boost his political career.

Minnesotans in line for tonight's rally were very aware of the mayor's behavior.

"It's despicable," said David, a voter from Hugo. "I think he should no longer be mayor."

David added that he'd like to see the bill that was sent to Obama back in 2009 during his health care speech. That bill, as it turns out, was in the ballpark of only $20,000-$30,000. Frey tried to explain away the discrepancy by arguing there were more "significant expenses" associated with Trump's rally.

Patty and Joel, a couple from Richfield, called Frey's words and deeds "disgusting" and "pathetic." They added that the mayor "needs to be a professional."

"I think he's ridiculous," agreed Becky and Lisa from Minneapolis.

They had an answer though: "The Democrats are desperate."

According to Trump campaign manager Brad Parscale, the Target Center had "backed off" on the security fees, and tonight's rally is ready to proceed. When Trump takes the stage after 8 p.m. ET, I'm guessing he will mention Mayor Frey once or twice...

Update: He did. During his Minneapolis speech, Trump told the crowd they've got a "rotten mayor."