The House of Commons Just Blew Up Over Brexit 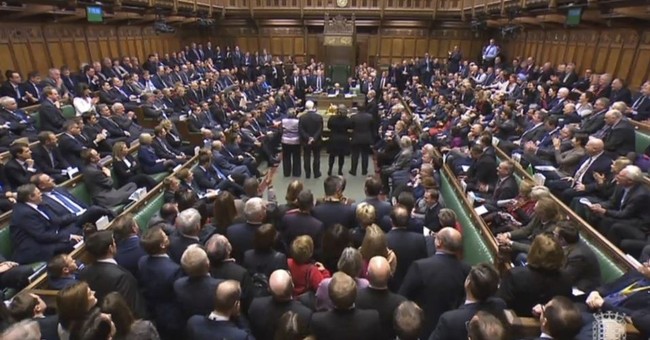 Outgoing House of Commons Speaker John Bercow is not leaving Parliament without yelling "order!" just a few more times. Several of those directives came on Monday as the speaker tried to preside over the latest Brexit tête-à-tête between Prime Minister Boris Johnson and Labour Party leader Jeremy Corbyn. Tensions are getting extremely high now that the UK is about two months out from the latest official date when it will finally separate from the European Union.

Parliament is still without a deal, having rejected former Prime Minister Theresa May's agreement with Brussels an historic three times. Meaning, a no-deal Brexit is becoming more and more plausible - and more and more unnerving. On top of that, Johnson suspended Parliament for one month, meaning several amendments will not be debated. Even Bercow lashed out at that decision, calling it "executive fiat."

That brings us to Monday's debate in the House of Commons, where the MPs were arguing over whether or not to hold a snap general election. Corbyn maintains that Labour will only support an election if the no-deal option is taken off the table. As you can see, it was utter chaos.

First Corbyn lambasted Johnson for heading toward a no-deal Brexit despite the protestations of industry and business groups, trade unions, and Parliament itself. He then accused the prime minister of suspending Parliament to "avoid scrutiny."

Johnson, Corbyn charged, is "shutting down democracy" and "taking this country off a cliff" with a no-deal Brexit. Brits may have voted to leave the EU in 2016, but there is "no mandate" for no deal, Corbyn reasoned. Other MPs shouted from their seats that Johnson was a "liar" and a "thug." The Labour leader said he wishes "to tear down this reckless government."

Johnson responded with a few shakes of the head and a question: Why is Corbyn not going to Brussels to negotiate his own deal?

It's a bit quieter across the hall in the House of Lords, but no less tense. I was able to sit in on a debate over a Brexit amendment last week in the parliamentary chamber, and, believe me, the heckling was in full force.

Every Brit I talked to in London last month admitted they don't have a clue what's going to happen come October 31. Judging by what just transpired in Parliament, they're in good company.

As you can see in the British press, there were plenty more outrageous moments where these came from on Monday as MPs openly protested the prorogation of Parliament. Some sang, while others waved signs reading, "Silenced." It was unprecedented.

The UK, as of now, plans to leave the EU, with or without a deal, on October 31. Halloween.