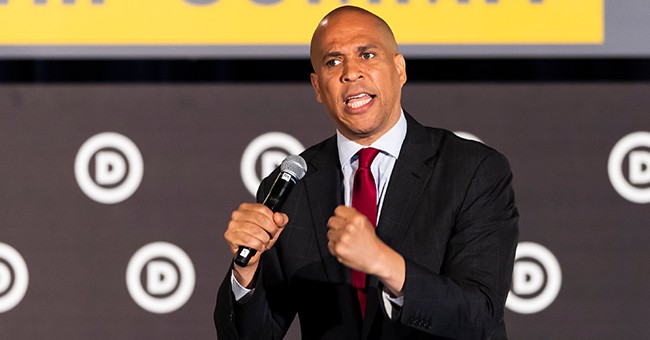 Sen. Cory Booker (D-NJ) isn't doing too hot in the presidential polls, so he's apparently resorting to violent rhetoric. It's at least getting him some attention. Last week his Iowa press secretary called Senate Majority Leader Mitch McConnell "a piece of s***" for reminding critics that he's not the only lawmaker opposed to reparations. President Obama was too. The Booker surrogate didn't have patience for that fact.

During an appearance on the Late Show with Seth Meyers Monday night, the candidate himself nearly challenged Trump to a fistfight. Booker explained to the host how one of his supporters told him to "punch" Trump in the face, but he informed the excitable attendee that that would be a felony. Yet, that doesn't mean he hasn't thought about it.

"Donald Trump is a guy who you understand he hurts you and my testosterone sometimes makes me want to feel like punching him, which would be bad for this elderly, out-of-shape man that he is if I did that," Booker said. "This physically, weak specimen - but you see what I'm talking about here?"

The Free Beacon was quick to note how Booker has called for "love" on his campaign. In a CNN town hall, for instance, the senator said he has "in radical love for all people." Yet we all just heard him doing his best schoolyard bully.

Marianne "I Will Harness Love" Williamson would be appalled.