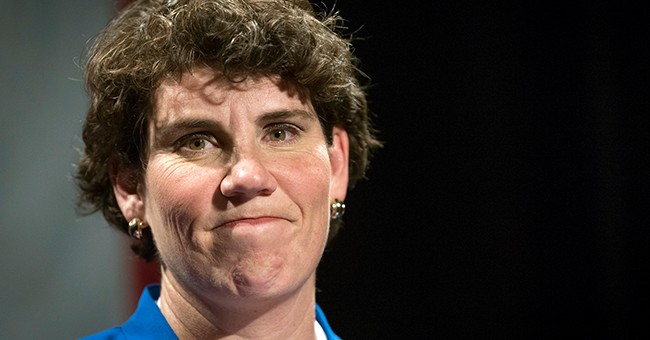 Election analysts are already writing off Amy McGrath's campaign to unseat Senate Majority Leader Mitch McConnell because she's committed a monumental gaffe. She's a Democrat, and Democrats aren't supposed to like Supreme Court Justice Brett Kavanaugh. That's why, when she told The Courier-Journal of Louisville that she would have voted for the Trump nominee, it was unforgivable.

"You know, I think that with Judge Kavanaugh, yeah, I probably would have voted for him," she said.

McGrath, a former Marine fighter pilot, first entered politics two years ago when she challenged Rep. Andy Barr. It was an impressive attempt, but she came up short. She had high hopes for her second go at Washington and raised $2.5 million in just one day, but she may have already jeopardized it.

Someone on her team must have briefed her on her mistake, because she then sent this back pedaled message.

I know I disappointed many today with my initial answer on how I would have voted on Brett Kavanaugh. I will make mistakes and always own up to them. The priority is defeating Mitch McConnell.

She probably thought she had no other choice but to retract it. Kavanaugh's confirmation battle last fall was one of the nastiest confirmation fights in history. And she was on the wrong side.

Politico's Jake Sherman is among the media figures who are confused as to why McGrath was ill-prepared for the question.

"It’s so completely and utterly stunning that McGrath was not ready for a Kavanaugh question. Absolutely unfathomable," he wrote on Twitter.

A day earlier, McGrath told Kentuckians to vote for her because she would work with President Trump to enforce his agenda.

"If President Trump has good ideas, I'll be for them," she told The Courier-Journal.

She can give up trying to cozy up to Trump. He's not interested.

....Why would Kentucky ever think of giving up the most powerful position in Congress, the Senate Majority Leader, for a freshman Senator with little power in what will hopefully be the minority party. We need Mitch in the Senate to Keep America Great!!

Team Mitch is here for it.