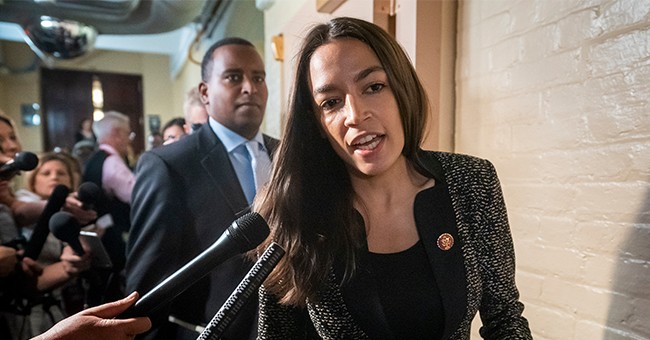 Update: Ocasio-Cortez is refusing to back up her claims about what she saw at a CBP detention facility on Monday.

Reporter: “Did you see somebody actually do that?”

AOC rolls up her window and refuses to answerpic.twitter.com/eovjpDfYgk

Border patrol agents are pushing back at the congresswoman's narrative. Actually, AOC was the one threatening them, according to a Washington Examiner report.

“She comes out screaming at our agents, right at the beginning [of the tour] … Crying and screaming and yelling,” said one witness who said he was stunned by the outburst in front of approximately 40 people.

“The agents, they wanted to respond, but they held back because she’s a congressional delegate. But when you have someone yelling at you in a threatening manner … ” the same person said. “They were like, ‘Hey, you need to kinda step back.’”

Rep. Alexandria Ocasio-Cortez (D-NY) described what she says was an awful scene at a U.S. Border Patrol facility in El Paso, Texas Monday night, where "brazen" officers were treating detainees like "animals."

These officers felt brazen in there. While mgmt was telling us it was a “secure facility” where *members of Congress* had to check their phones, we caught officers trying to sneak photos, laughing.

CBP’s “good” behavior was toxic. Imagine how they treat the women trapped inside. https://t.co/wtkIy8EQWO

Ocasio-Cortez was part of a group of lawmakers who visited the border facility on a trip organized by the Congressional Hispanic Caucus. The trip comes just a few days after actress Alyssa Milano and Sen. Elizabeth Warren (D-MA) were denied access to the Homestead detention center near Miami. In a Twitter video, Milano explained how authorities there told her she'd have to file a media request and they'd get back to her in two weeks. Milano mused that meant it gave them time to stall and actually "clean up" the place.

Even if they let you in, these women told us CBP did a lot of “cleaning up” before we arrived.

They were moved into that room from outside tents before our arrival. They said they’d gone 15 days w/o a shower, & were allowed to start bathing 4 days ago (when visit was announced). https://t.co/gozTUeaWa5

The freshman Democrat went on to describe other "horrifying" conditions at the center. She witnessed "systemic cruelty w/ a dehumanizing culture that treats them like animals." One woman, she said, even told her that the CBP made her drink out of a toilet because there was no available water.

These reported conditions have convinced AOC more than ever that these facilities are "concentration camps."

Meanwhile, one refrain we‘ve heard is that people are overcrowded in CBP concentration camps because the shelters (which are humane places where families can stay together) are full.

So we went to a shelter. They said that wasn’t true at all. Only 150/500 spots were filled. pic.twitter.com/E0yPQ3o7CC

Sen. Ted Cruz (R-TX) also visited the border on Monday, but he pointed to a different problem. At the Central Processing Center in McAllen, Texas, Cruz related how roughly 50 percent of the adult men crossing into the Rio Grande sector have a child with them.

"The reason for that, the fault of that is the U.S. Congress because we have told the traffickers, the human traffickers, we’ve told the drug traffickers, if you bring a child, that child is essentially a get outta jail free card," he insisted. "It is an incentive from the United States Congress: Go and find a small child and take that arduous journey, risk that child’s life."

Our border crisis was one of the most pressing issues at the first two Democratic primary debates. And, House Speaker Nancy Pelosi recently caved on a Republican-led immigration bill out of the Senate that funds border needs. Ocasio-Cortez was one of several progressives to criticize Pelosi for not considering their amendments and refused to vote in favor of it.

If Alexandria Ocasio-Cortez actually cared about the crisis on the border, she would have voted for the $4.6 billion in humanitarian assistance + security that both the House & Senate passed.

Why did she vote no?

She opposes anything @realDonaldTrump supports.