Watch: Family of Fallen Officer Singh Thank Trump for Being 'Only One' to Reach Out 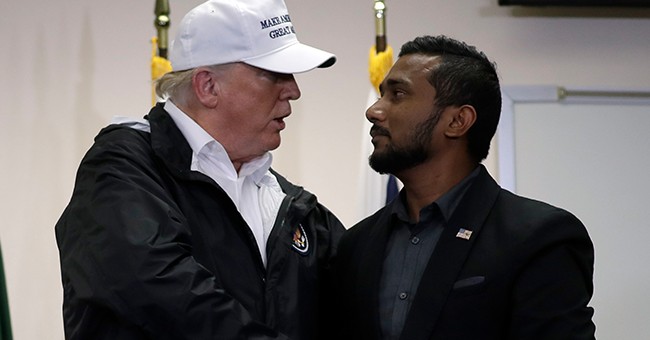 California Police Officer Ronil Singh was killed by an illegal immigrant at a traffic stop the day after Christmas. He was just 33 years old and leaves behind a wife and an infant son. President Trump invited the fallen officer's family to the annual Peace Officers' Memorial Service on Capitol Hill, where he asked them onstage to say a few words. They remembered their brave loved one, and also took a few moments to thank Trump for the work he's doing to curb the surge of illegal immigration.

Cpl. Singh's brother, Reggie Singh, stepped up to the microphone and thanked the law enforcement in the audience for all the work they do, before telling the president that he and his family are 100 percent behind him.

WATCH: Reggie Singh, brother of police officer Cpl. Ronil Singh who was killed by an illegal alien last year, on his support for law enforcement and President @realDonaldTrump pic.twitter.com/11YhI79NCX

“This man over here,” Singh said, turning to Trump. “The Singh family supports him. Whatever he’s doing for law enforcement, we support him. His team at the White House has reached out to us multiple times.”

Reggie participated in a roundtable with Trump and border patrol officers who were stationed at the U.S.-Mexico border a few months back, where he also took time to express his support.

Ronil Singh's brother speaks at border wall: "The way he was killed, what my family is going through right now, I do not want any other family or law enforcement person to go through that." https://t.co/QW6OHwq4v8 pic.twitter.com/YwFyJ5qCFX

Cpl. Singh's widow, Anamika, was overcome with emotion at Wednesday's service, where she too turned to the president and wholeheartedly thanked him.

“It’s something I didn’t get to do at the office," she noted. "I actually want to thank you personally. You’re the only one who reached out and gave your condolences to the family. And it means a lot to all of our law enforcement families that are here for the sacrifice that my husband and his brothers in blue and sisters in blue have given. So I want to thank you for that. And every family sitting out here wants justice for what happened to their loved ones. And that’s what I want for my husband.”

Trump issued a national emergency in February to expand the border wall.