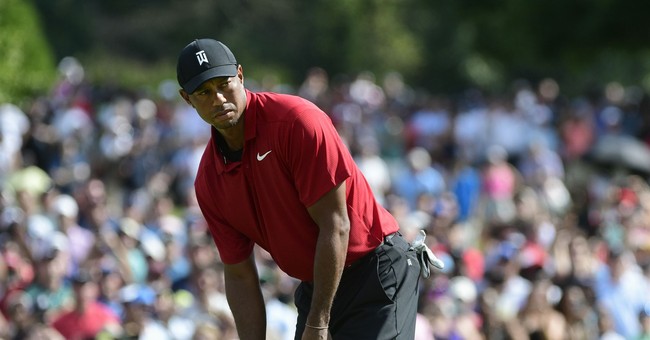 President Trump invited Tiger Woods to the White House so he could put a presidential medal of freedom around his neck. It is the nation's highest civilian honor and one many would say Woods earned after his incredible comeback win in the Masters last month. It was Woods' first title there since 2005, and it was both a professional and personal achievement for the once-embattled athlete.

Trump, a golf fan himself, has played one or two rounds with Woods over the years and clearly admires the man, judging by how he introduced him on Monday.

"It's my privilege to award our nation's highest civilian honor to one of the greatest athletes in the history of sports," President Trump said on Monday, introducing golfer Tiger Woods pic.twitter.com/e9nZvCizBx

It was an emotional and heartwarming moment. Well, for some. For MSNBC, it was another opportunity to criticize the president.

"Tiger Woods was genuinely emotional and humble as he received our nation's greatest civilian honor today - even if it came from a guy who regularly commits golf's greatest dishonor by driving his cart on the green," Christopher Hayes noted on his program.

"Guy who drives his golf cart all over the green gives Tiger Woods an award," MSNBC added by way of introducing his segment.

Or, I don't know, you could have just said "president."

While Hayes criticized Trump's golf etiquette, other media took issue with the award recipient. By accepting a medal from Trump, Woods has ruined his legacy, the editors at the Baltimore Sun wrote.

“Mr. Woods has made his choice, and part of his legacy will be embracing a man who incited bigotry and racism."

The editors went on to lecture the decorated athlete on how he should have declined the White House visit.

"He could use this opportunity to raise awareness of an issue that has surely impacted his life, as well as those of many of his relatives and ancestors. Or he could at least decline to allow the president to co-opt his glory with a White House photo-op."

Thankfully Woods is not worried about the optics or the media's reaction and accepted the medal he so rightly earned.