Justin Trudeau Addresses the 'Erosion of Trust' Threatening His Administration, But Refuses to Apologize 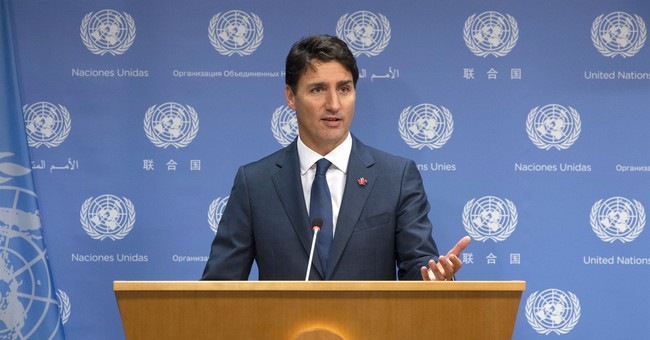 The honeymoon is over for Canadian Prime Minister Justin Trudeau.The once popular leader is having trouble finding support from his fellow Canadians in light of a corruption scandal in his administration. The allegations say that he pressured his former justice minister Jody Wilson-Raybould not to take action against a large Canadian engineering company, SNC-Lavalin, in a case involving allegations of corruption in Libya because he was worried it would cost jobs in Quebec. Wilson-Raybould claims that when she refused Trudeau's request, she was fired.

Trudeau did admit that he asked her to "revisit" her decision to punish SNC-Lavalin, but didn't go so far as to say he was guilty of wrongdoing.

“I was not aware of this erosion of trust and as prime minister and head of the cabinet, I should have been aware of it,” Trudeau said Thursday.

He added that his government "will be stronger for having dealt with these issues."

Unimpressed critics didn't have much to say about Trudeau's non-apology.

“I think he failed to show true contrition,” said Janet Brown, an independent pollster and political analyst in Calgary. “There wasn’t a real acceptance of responsibility.”

Another young, popular European leader, Emmanuel Macron, lost support from citizens after he announced plans to hike fuel taxes as part of his environmental agenda and to discourage people from using fossil fuels. Instead, angry citizens donned "yellow vests" to demonstrate that the Macron's economic reforms would severely affect workers. As the protests got out of hand, Macron relented and dropped the tax.

The "Yellow Vests" protests have died down since the fall, but at the height the movement some 300,000 people participated in rallies across the country. The scenes were especially violent in Paris, where people clashed with police, lit buildings on fire, blocked roads, etc.