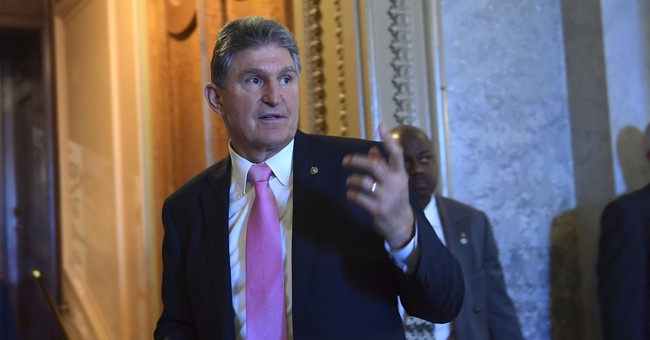 Sen. Joe Manchin was the only Democratic Senator to shake President Donald Trump's hand after his #SOTU address.

As expected, the Democrats' applause for President Trump was few and far between Tuesday night. When he mentioned historic low unemployment, little to nothing. When Trump said he wants America to choose greatness, Democrats remained expressionless. Some even remained in their seats when Trump recognized our selfless veterans.

Not Joe Manchin. While the Democrats remained mostly stoic and unimpressed with Trump touting his accomplishments, the West Virginia senator was having a grand old time. He clapped heartily at the president's mention of oil and gas success in the U.S. His reaction was not a surprise, considering how important coal is to the state of West Virginia.

He looked behind him at one point to see if any of his fellow Democrats, particularly the women who were dressed in white to pay homage to women's suffrage, shared his excitement. He didn't have much luck. He wasn't dismayed, however, and even gave the president a wink.

Good on ya, Manchin.

Here was another visual that contrasted the fun Manchin was having with the Democrats' depression.

Senator Manchin is having a great time! @AOC not so much.#SOTU pic.twitter.com/wv8dpo8E7l

Yes, he even clapped at the mention of a wall.

Sen. Joe Manchin clapping when President Donald Trump says he will build a wall at #SOTU

Cue Democrats wondering if he was really one of their own.

Yet, I must note, the Democratic female lawmakers did eagerly clap at Trump's mention of the large number of women serving in Congress and grasping more and more jobs.

Trump: “women have filled 58% of newly created jobs last year”. *Democrats stand up and clap*
Trump: “don’t sit down yet, you’re going to like this:
“We also have more women serving in Congress than at any time before”