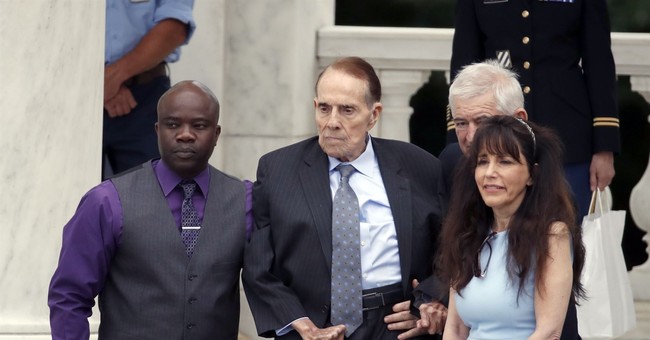 Some moments are just too moving for words. So, before I write any more, watch below what happened at the Capitol Rotunda on Tuesday when Sen. Bob Dole showed up on Capitol Hill to say goodbye to an old friend.

WATCH: Former Sen. Bob Dole is helped out of his wheelchair to salute the casket of George H.W. Bush in the U.S. Capitol. pic.twitter.com/BeIz3USrHr

Dole, 95 years old, shares many things in common with President George H. W. Bush, who died on Friday at age 94. For starters, they are both World War II heroes and they both ran for president in the 1980s, with Bush finally prevailing in 1988.

As you can tell from the video, Dole respects his fellow veteran and political rival and wanted to give a proper sendoff.

President Bush will lie in repose in the U.S. Capitol Rotunda until Wednesday morning, when his body will be moved to National Cathedral for a state funeral. On Thursday, his body will be flown back to Texas to be buried near his wife Barbara Bush and his daughter Robin at the The George H.W. Bush Presidential Library and Museum. Mrs. Bush died last April and Robin died from leukemia at just four years old.