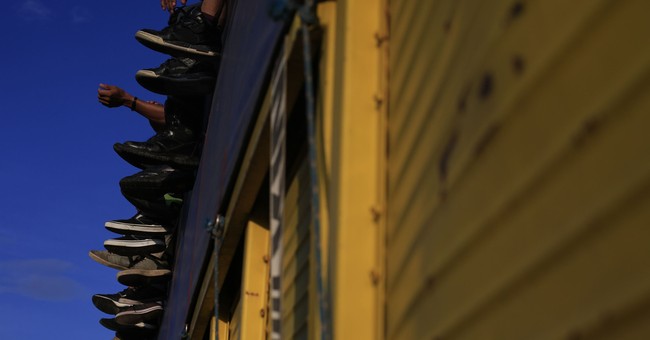 Hundreds of migrants stormed the U.S. border this weekend between Tijuana and California, some throwing rocks. It was captured on video. Border patrol agents responded by using both tear and pepper spray on the crowd. Some called it cruel, but Border Patrol Foundation President Ron Colburn said both actions were "absolutely" warranted.

On Fox & Friends, Border Patrol Foundation president defends pepper spraying latinx migrants because “it’s natural. You could actually put it on your nachos and eat it.” pic.twitter.com/QLdQXqqNno

The substance that the border agents used is OC pepper spray. It consists of water, pepper, and a small amount of alcohol for "evaporation purposes,"  Colburn explained. He insisted it was “natural."

"You could actually put it on your nachos and eat it,” he said. "It's a good way of deterring people without long term harm."

Still, some outlets like NBC witnessed and photographed women and children running from the tear gas, clearly in distress.

Others like journalist Sharyl Attkisson sarcastically tweeted how it seemed the women and strollers were few and far between.

I'm surprised the US would use pepper spray and smoke pellets with all the baby carriages and moms around. https://t.co/fZm3pCBFGo

Mexico also appeared to have little patience for the group of migrants who stormed the border, announcing they are going to deport them and try to maintain its relationship with U.S.

At last count, the Central American caravan includes 7,500 migrants. President Trump sent additional troops to the border to deal with the influx and according to Border Patrol Chief Brian Hastings, it was well worth the resources. The additional assistance at the border allows for the hardening of ports of entry to prevent mass rushes like the one we saw this weekend, while providing more air mobility to move agents along the border, and assisting with force protection, he explained to The Hill.

If need be, Trump threatened to close the border permanently.

Mexico should move the flag waving Migrants, many of whom are stone cold criminals, back to their countries. Do it by plane, do it by bus, do it anyway you want, but they are NOT coming into the U.S.A. We will close the Border permanently if need be. Congress, fund the WALL!